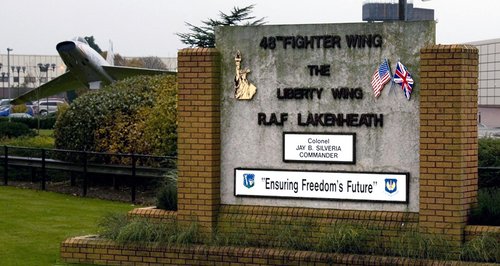 A US pilot who died when his fighter jet crashed near RAF Lakenheath has been named as Major Taj Sareen.

The 34 year old, with the Marine Fighter Attack Squadron 232, was killed when his FA-18 Hornet came down a couple of miles away from the base at around 10.30am on Wednesday.

The cause of the crash is being investigated, the US Marine Corps said.

Maj Sareen was returning with his squadron from a six-month deployment with Operation Inherent Resolve, the US mission against Islamic State in Iraq and Syria.

Major General Michael Rocco, commanding general of 3rd Marine Aircraft Wing, said: ``Our thoughts and prayers are with the family, friends and fellow Marines of Maj Sareen and we are currently providing support to those affected by this tragic incident.''

Maj Sareen, from Hillsborough, California, who won two achievement awards and an Air Medal, also served a tour of duty in Afghanistan in 2010.

His plane reportedly encountered problems with refuelling shortly before the crash, but the US Marine Corps could not confirm this.

The aircraft was part of a fleet of six fighter jets travelling from Bahrain to the base in Miramar, California, a US air force official said.

Following the crash, the remaining five FA-18 Hornets were safely diverted to the RAF Lossiemouth airfield in Scotland.

The crash comes just over a year after an American fighter based at Lakenheath crashed near a school in Lincolnshire.

The F-15 fighter jet from the US Air Force's 48 Fighter Wing crashed in fields near Spalding on October 8 2014. The pilot ejected safely, sustaining only minor injuries, and no one on the ground was hurt.