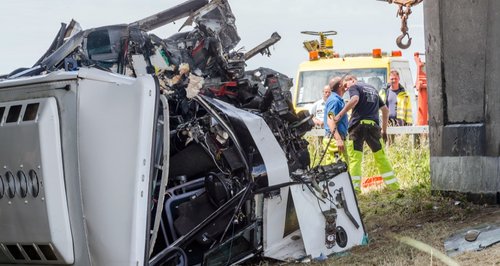 Belgian police are investigating after a coach carrying 34 Essex school pupils crashed, killing the driver and leaving a 13-year-old boy suffering from a fractured skull.

Staff were briefed by the Headmaster this morning at 7.45am, before departing for the many School trips and activities that are going ahead as planned today to locations around the country. Pupils and staff boarded coaches at around 8.30am excited about the day ahead, whilst also coming to terms with yesterday’s events. Counsellors are in School all week to talk to them and their families. Clearly, our thoughts are still with the two pupils in hospital in Belgium, and shortly after 11.00am UK time, the Headmaster spoke with the British Consulate and the parents of the pupil with the fractured skull. He is pleased with his progress and he is now out of intensive care, being monitored for 48 hours. The representative said he was on his way to visit the other pupil and will update the School with further news.

Mr Davies has expressed his heartfelt gratitude for the support of the British Consulate, who sent over thirty representatives from several sites to assist with the operation on the ground in Belgium, and the Red Cross who provided support for families arriving from the UK to collect their children. Along with the Foreign and Commonwealth office and of course the Belgian authorities, the School really appreciates their help.

A spokesman for the Middelkerke town council, near where the crash took place, said police were looking into the cause, but could give no indication of when its findings would be released.

Brentwood School has confirmed the coach was carrying children aged between 11 and 13, and that one child was in intensive care with a head injury.

Six teachers were also on the coach which was travelling to Cologne in Germany when it crashed into a bridge in Middelkerke, West Flanders, and shot off the road.

Pictures of the bus show it lying on its side with the front completely destroyed.

One teacher is thought to have suffered a broken collar bone in the collision that happened at around 9.45am local time (8.45am BST).

Speaking at a press conference this evening, the Mayor of Middelkerke Janna Rommel-Opstaele confirmed one adult, believed to be the assistant driver, and two children were still in hospital.

He said those in hospital would be monitored throughout the night and the parents of the children were at their bedsides.

Middelkerke and Nieuwpoort sent 35 firefighters,10 police officers and 10 members of the civil defence force to the scene of the crash.

Ten ambulances, three doctors, three nurses were also at the scene, and a team of Red Cross volunteers were deployed to help the children in Middelkerke.

Twenty-five children are already on their way home while the remaining seven and staff are expected to leave Belgium on a coach later today.

The headteacher of Brentwood School, Ian Davies, said: "All of the children managed to walk off the coach.

"One of the children subsequently had a head injury. He had a scan and they found a small brain bleed as part of his fractured skull.

"Some of the children seem to be fairly relaxed and doing pretty normal things like swimming and playing football."

He also sent his condolences to the family of the coach driver, adding that he did not know if the company had been used by the school before.

The headmaster said he would like to thank and congratulate all the teachers who were there in what was a "terribly difficult situation".

The Foreign Office has confirmed that it was working with Belgian authorities to establish details of the incident.

In a statement, it said: "We have been informed that the driver was killed in the collision and his assistant has been severely injured.

"Our thoughts are clearly with his family and all the families of the pupils and teachers involved.

"Two senior members of staff have travelled to Belgium this morning and as soon as we have more information we will inform everyone involved.''

"The rest of the pupils are being looked after in a municipal swimming pool. Many of them are completely uninjured and some are even playing football,'' she said.

The coach involved in the crash is owned by Richmond Coaches of Lisburn, in Northern Ireland, and a company spokesman confirmed it only employed Northern Irish drivers.

He added that it was now trying to establish the identity of the driver and his assistant, adding: "Any incident involving a coach crash like this is clearly a tragedy."

Brentwood School is a co-educational independent day and boarding school.

Founded in 1557 and established in 1558, the school has a Tudor schoolroom, a Victorian chapel and several Grade II listed buildings.

The school is set in over 72 acres of land in the centre of Brentwood.