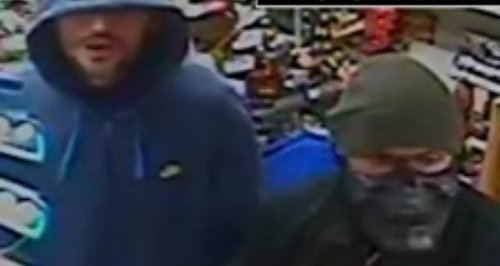 A CCTV image has been released of two men police want to find after an attempted armed robbery at a shop in Benfleet.

It happened at the Day One Kiln Convenience Store on Kiln Road back in September.

Essex Police said: "Two men entered the Day One Kiln Convenience Store in Kiln Road just after 10pm on Saturday, September 12 and demanded the staff member open the till.

"One of the men, who was wearing a mask, was armed with a handgun. The victim said he would ring the police and the suspects made off empty handed towards Victoria House Corner.

"The first suspect is described as white, 25-years-old, of medium build, 6ft tall, wearing a black jumper and a black mask around his face. He also wore a green bobble hat pulled down covering his eyebrows.

"The second was also white, 25-years-old, 6ft tall, of medium build, with a blue hooded top with the hood pulled down over the top half of his face. He had a goatee style beard.

"Anyone with information is asked to contact Dc Mike Buckingham at Southend CID on 101 or Crimestoppers on 0800 555 111."