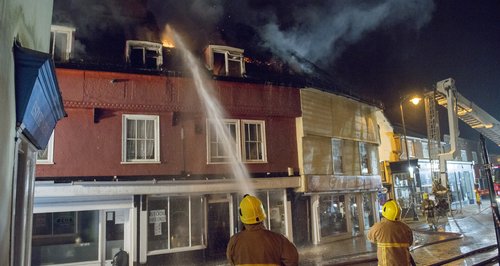 An Essex bus driver's set to receive a special commendation, after using his vehicle to help a naked man escape a burning building in Braintree.

Andy Waterman, was driving off-duty in Braintree's high street on Wednesday evening when a group of people started flagging him down and asking for help.

"I asked them what the problem was and they said a man was stuck on the roof of his flat because it was on fire. I drove nearer and all I could see was thick, black smoke.

"I saw the man and thought 'We've got to get him to safety."

Andy then drove towards the building and parked outside, allowing the trapped man to jump 10 ft down to safety.

Firefighters arrived and pitched a ladder to help him to the ground.

Speaking about the blaze, incident commander Dave Barritt said: "The man was trapped on the third floor and there was no way he could get out.

"If the bus hadn't been there I don't know how he would have escaped - the fall could easily have killed him. The bus driver's actions saved this man's life.

"It's an unusual rescue, but it was extremely effective."

Eight fire crews were called to the scene and took about eight hours to tackle the flames.

Adrian Jones, managing director at First Essex, which employs Mr Waterman, said: ``We are very proud of Andy - he was in the right place at the right time. We are pleased to hear the man is OK and we wish him a quick recovery.''

Andy told Heart he only realised what had happened - when he told his wife and son.