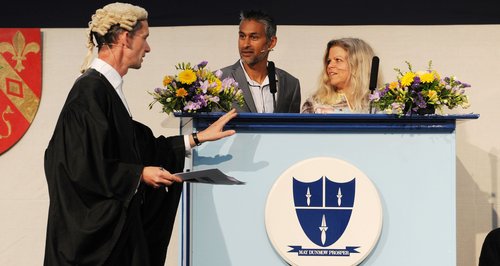 Married couples have been blessed with a flitch of bacon after going on trial to prove their undying love for each other.

Ralph and Helen White, who have been married for 36 years, were among those who won the prize after convincing a jury of "six maidens and six bachelors" that they "had not wished themselves unmarried for a year and a day".

They were taking part in the Dunmow Flitch trials in Great Dunmow - a tradition that goes back to the early 12th century, where successful couples take an oath and are presented with a flitch of bacon.

The retired couple said they believed working hard and spending time together had made them closer, adding that they rarely argued.

"Some people say 'oh you need the occasional row to clear the air' but I don't believe that myself because it can become an everyday habit."

The couple said they would be having a cup of tea to celebrate, after they were interrogated by "barristers'"in a packed marquee-cum-courtroom.

There was applause from the audience when Mr White said: "We surprise ourselves how happy we are, it actually gets happier every day."

Caroline Bradley, one of the barristers representing Mr and Mrs White, said the couple were "genuinely beautiful", arguing that there was no better pairing for which a pig could give its life.

After just 15 minutes, the jury unanimously found Mr and Mrs White were telling the truth when they said they were enjoying wedded bliss.

Having being carried on a bench to a town square, the couple knelt on pointed stones as Judge Dave Monk passed sentence on them, saying: "For this is the custome of Dunmow well known, Tho' the pleasure be ours, the bacon's your own."

The Whites were the first of five couples to be "tried" at this year's Dunmow Flitch Trials.

The trials are held every four years.

The origin is commonly thought to date back to 1104, when Lord Reginald Fitzwalter and his wife dressed as humble folk and begged the prior of the Augustinian Priory of Little Dunmow for his blessing, a year and a day after they were wed.

The prior, so impressed with their devotion, gave them a flitch of bacon.

Lord Fitzwalter then revealed his true identity and gave his land to the priory, on condition that a flitch should be awarded to any such couple similarly devoted.

By the 14th century the Dunmow Flitch had become well known, but it was not until 1445 that the winners of the flitch were recorded.

The trials were alluded to by English poet Geoffrey Chaucer in the Wife Of Bath, one of the best known of his Canterbury Tales.