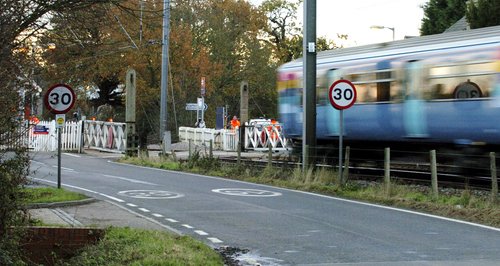 The mother of one of two Essex teenage girls killed at a level crossing has expressed her anger after discovering a safety feature installed in the wake of the tragedy was not working just days before the 10th anniversary of her daughter's death.

Tina Hughes, 57, found that an automatic locking system was not working when she visited the site last week where her daughter was killed in Elsenham.

Charlotte Thompson, 13, and Olivia Bazlinton, 14, were killed after being hit by a train at the crossing on December 3 2005.

Olivia's mother Ms Hughes said she was ``delighted'' Network Rail (NR) had closed 987 crossings since 2010 and praised the decision to recruit staff who carry out risk assessments and inspections at each crossing.

But she told the Press Association she was distraught when she discovered the magnetic locking system at Elsenham was broken.

"I was pretty upset because I hadn't been told,'' she said. "It's the 10th anniversary and I expected Elsenham to be perfectly safe.

"I'm delighted to hear that it's been tested and it's now working again, but (I had my) heart in (my) mouth.''

NR said the gates were permanently closed when the problem arose, meaning pedestrians had to use a car crossing or a footbridge.

Although the lock was fixed by the end of last week, Ms Hughes, a project manager from Watford, claimed it was "absolutely critical'' it does not fail again.

She said: "It is a safe crossing when it's working properly. It's almost impossible to be killed at Elsenham now because the gates are really heavy, proper, old-fashioned gates.''

The automatic locks were installed in August 2007 following a recommendation by the Rail Accident Investigation Branch (RAIB).

Charlotte and Olivia's parents fought a long battle with NR over what the company knew about safety at Elsenham before their deaths.

Eventually, in March 2012, NR was fined #1 million after admitting health and safety offences, with the company's then chief executive Sir David Higgins apologising "for the mistakes made by us in this tragic case''.

The evidence included a memo written by a level crossing manager for NR's predecessor, Railtrack, in May 2001.

He described Elsenham as "undesirably risky'' and noted it is used by "a lot of schoolchildren'', adding: ``The sighting to trains in either direction is very poor and the risks of disaster are real.''

NR said that over the past five years it has improved sighting at 1,100 crossings, installed brighter LED lights at 494 and fitted more than 100 with audible warnings that announce when a second train is coming.

Some 66 crossings now have a time delay to prevent a repeat of the incident at Moreton-on-Lugg, Herefordshire, in January 2010 when a woman in a car died after a barrier was mistakenly raised as a train approached.

He said: "We have made huge strides in level crossing safety over 10 years and I'm proud of the fact that our level crossings are the safest in Europe. But there's still so much more to do.''

Despite safety improvements some 37 people have been killed at crossings in the past five years - excluding suspected suicides - according to the Rail Safety and Standards Board (RSSB), although there have been no fatalities since February 8.

Ms Hughes was invited by NR to become its level crossings user champion in 2012.

She claimed "one of the major problems'' of the company's policy is that it has not focused on the development of new technologies, with most crossings having ``nothing other than a stop, look and listen sign''.

She accepted NR had done "a lot'' to improve safety but warned many of the existing 6,300 crossings are "the same as they were when they were put in in the 19th century''.

She commented: "Every crossing should have some kind of active warning because now we are distracted by smartphones and earphones playing music and just the business of life.

"Olivia and Charlie were distracted by the fact that their train was coming in and they wanted to catch it. There was nothing to alert them to the fact there was a second train coming.''

Ms Hughes said Olivia's death is "still as painful now as it was back then'' and called on the rail industry to continue to learn from Elsenham because that is "the only legacy'' the girls can leave.