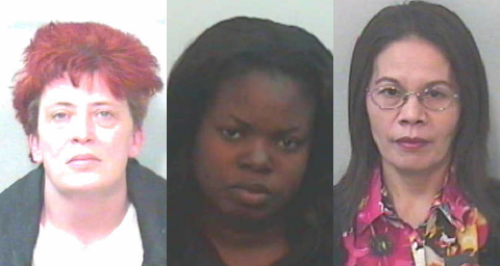 Three "evil and ruthless'' care home workers who admitted assaulting an elderly resident following a television investigation have been jailed.

Anita Ray, 45, of Victoria Street, Braintree, Lorna Clark, 46, of Nowell Close, Bocking, and Adeshola Adediwura, 33, of Clockhouse Way, Braintree, all in Essex, each admitted one charge of assault at Chelmsford Crown Court at an earlier hearing.

The offence relates to the abuse of former social worker and volunteer Florence Joan Maddison, 84, who had dementia, cancer, diabetes and was partially paralysed.

The trio were charged following an undercover investigation by the programme into the former Old Deanery care home, Braintree, which aired in April 2014.

Sentencing each of them to four months in prison, Judge Patricia Lynch described the abuse as a "massive breach of trust'' adding that the public needed reassurance that loved ones would be properly looked after in care homes.

She said: "You are a disgrace, you deserve to be punished.

"We are dealing with an 84-year-old lady who was vulnerable physically and vulnerable mentally and she could not help the way that she behaved because of her condition.

"I understand that caring for elderly people in a nursing home is not an easy job but you were supposed to be professionals and there is no excuse for your behaviour.

"Despite the shortcomings of the Old Deanery and despite your lack of training, you know full well that vulnerable ladies don't need to be roughly manhandled.

"She was entitled to be treated with dignity and respect.''

Prosecutor Martin Mulgrew said Mrs Maddison was a "highly vulnerable'' victim who was unable to wash and dress herself.

Barristers representing the trio said the home had not been adequate for her needs and none had sufficient training.

Panorama sent a reporter to work at the home after being approached by a whistleblower in 2013, Mr Mulgrew said.

One clip filmed as part of the programme and played in court showed Ray struggling to lift Mrs Maddison from a bed.

She refers to her as an "alley cat'' before forcefully slapping her.

Another showed Adediwura striking the victim four times on the knuckles with a hair brush before rubbing the brush on her mouth.

The third showed Clark aggressively grabbing Mrs Maddison as she tried to dress her.

Her daughter, Gillian Lee, told the court her mother had been left defenceless at the hands of her abusers because of her disabilities.

She added: "Knowing these vile people were exercising control over my mum and other vulnerable people is beyond my ability to adequately express.

"These so-called carers were evil and ruthless and totally lacking in any standard of compassion for an elderly lady.

"Time and time again, she was saying 'stop you're hurting me'. They took no notice of her pain and distress.''

Gareth Hughes, mitigating for Clark, originally from the Philippines, said the home was not able to offer the kind of specialist care somebody with Mrs Maddison's difficulties needed.

He added: "It was a chaotic environment and, although she had some training, it was not the kind of specialist training that was clearly appropriate.''

Joanne Eley, mitigating for Ray, said Mrs Maddison's placement at the Old Deanery had been inappropriate because it was not equipped to deal with her dementia.

She said Mrs Maddison did not suffer any physical injury following the slapping incident.

Evelyn Hicks, representing Adediwura, originally from Nigeria, said the attack had been an ``isolated incident''.

"She originally applied for a job as a housekeeper but was persuaded to become a career,'' she added.

"She had no training or background as a carer, nothing at all to suggest she was fit for the role.''

An inspection carried out by the Care Quality Commission after the documentary found the Old Deanery was failing in eight out of nine key areas.

Since the abuse allegations were made, the home has been rebranded as the New Deanery with new management.