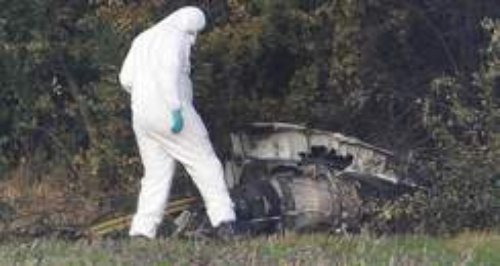 Investigations will continue today into how a private aircraft crashed moments after take-off, killing both people on board.

The Beechcraft King Air 200 turboprop aircraft came down in Chigwell, Essex, shortly before 10.20am yesterday.

Both people on board were described by the aircraft's owners and operators London Executive Aviation (LEA) as "highly experienced professional pilots''.

LEA managing director George Galanopoulos, who visited the site, said the flight left nearby Stapleford Airport destined for Brize Norton in Oxfordshire. It contradicts initial claims from the aerodrome, whose spokesman said it had no connection with the doomed flight.

She said: ``We are working with investigators to establish the route taken and obviously the reason for the flight.''

LEA said the accident occurred almost immediately after take-off, when the aircraft came down in a field near Stapleford Airport.

The eight-seater aircraft was manufactured in 1981 and had its most recent scheduled maintenance inspection less than four months ago, LEA said.

The captain had extensive experience of flying King Air aircraft and was a Civil Aviation Authority flying examiner.

Mr Galanopoulos said: ``Everybody at London Executive Aviation is shocked and deeply saddened by this tragic accident.

"Our hearts go out to the families and friends of our colleagues who lost their lives.

"We will do everything possible to support them at this difficult time. We will also co-operate fully with the authorities charged with investigating the causes of the accident.''

Witnesses reported hearing a "loud bang'' and "the ground shaking'' as the eight-seater aircraft came down, a short distance away from where members of the Girl Guides were camping.

A spokeswoman for the organisation said: "Our site is completely safe and unaffected by the crash.

"They were about three fields away, so everyone is safe."

Essex County Fire and Rescue Service, who were also called to the scene, said the aircraft was "100% alight'' when they arrived.

The Air Accidents Investigation Branch has sent a team to investigate the incident.