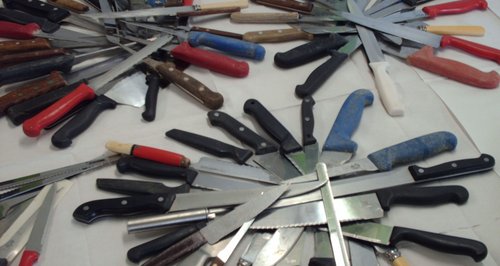 A knife amnesty is being launched in Clacton today (Thursday 29 May) in a bid to cut down on the number of weapons on the streets there.

People in the town can now hand in any bladed weapons to the police station, by dropping them in a secure bin, without being prosecuted.

It is one of a number of steps being taken in the Tendring area to reduce the number of knife related crimes there, which has seen a rise of offences from 153 to 188 over the last year.

Chief Inspector Barrie said: "Clacton is not the only area to have experienced an increase in knife crime but we plan to trial the amnesty here to see whether it will then be worthwhile expanding it to other areas of Essex.

"Although I will consider it a success if it takes only a few knives off the streets, which might otherwise have ended up being used in crime."

If someone is unsure about whether to bring in a knife they can contact Clacton Police Station on 101 for advice.

Chief Inspector Barrie added: "I am hoping that this amnesty will persuade people thinking about carrying a weapon to think twice about it and to then dispose of it with us in a safe manner.

"It will also provide a way for law abiding members of the public to get rid of knives they no longer need in way that guarantees they will never end up in the wrong hands.

"As part of the amnesty we will also be taking a zero tolerance approach to anyone found to be illegally in possession of a knife on the streets.

"We will be developing intelligence on any locations where knife crime is likely to occur and carrying out stop and search operations in those areas.

"We are also engaging with schools, volunteer groups and charities to tell young people about the dangers of knives and the risks involved in carrying one.”

The knife amnesty has the full backing of Police and Crime Commissioner, Nick Alston, who said: "I am of course concerned at the increase in knife crime in parts of our county, including Tendring district. We need to change attitudes so that people would never consider using knives to injure another person and so would never carry a knife in the first place.

"I am in favour of any initiative that raises awareness of the dangers of knives. The knife amnesty trial will also provide a means for people to dispose of weapons safely.

"I welcome its introduction, and look forward to learning of its impact over the coming months.

"I remain a strong supporter of the work of KnifeCrimes.Org and Only Cowards Carry to educate young people about knife crime. We need both education and enforcement.”

Caroline Shearer, the founder of the Only Cowards Carry campaign, and Ann Oakes-Odger MBE, founder and chief executive officer of KnifeCrimes.org and Victims’ Advocates have also given their support to the scheme.

Ann Oakes-Odger said: "The launch of this knife amnesty bin will not only help to raise awareness to the consequences of carrying bladed weapons, it also offers an opportunity to those in possession of illegal knives to dispose of them safely.

"Community safety is paramount and every knife ‘binned’ is one less threat to someone’s life and another person that has taken the message on board ‘Sharp people don’t carry!’ Information about illegal knives and transporting them safely can be found on our website or ask Essex Police.”

Caroline Shearer said: "Only Cowards Carry have worked very hard to get an amnesty bin in Clacton over the last year. This is due to the amount of knives we have had handed into our shop and the amount of bladed incidents that have occurred in Clacton and the Tendring area.

"We are very grateful to Police and Crime Commissioner Nick Alston and Chief Constable Stephen Kavanagh for the support they have given with regards to knife amnesty bins.

"I would also like to thank Chief Inspector Cat Barrie and her team in helping us to fulfil one of our goals in helping to keep our streets safer."