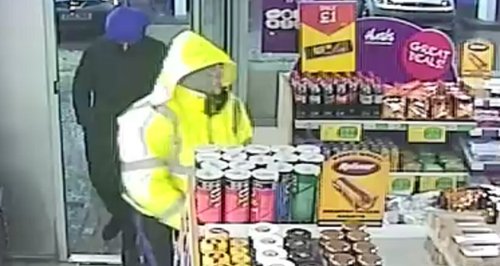 Two men, armed with a knife, have robbed a petrol station in Grays.

They threatened staff at the Esso on Stanford Road at around 7.55am yesterday (Thursday, 7 January).

Essex Police says one man - who had a large knife - approached the cashier, walked behind the counter, and took a three figure sum of money.

Investigating officer Pc Owen Clements, of Grays CID, said: "I am keen to hear from any witnesses who saw them running from the Esso garage towards Woodview and Rectory Road."

A CCTV image has been released of two men officers want to identify.

Essex Police said: "The first was described as white, between 5ft 8ins and 5ft 10ins tall and of medium build.

"He wore black tracksuit bottoms with a blue stripe on the outside and a yellow fluorescent coat with the letters BDB on the back.

"The second man was described as white, between 5ft 8ins and 5ft 10ins tall and thin. He wore a black tracksuit bottoms, black jacket with a bright blue hooded top underneath with the hood up".

Witnesses or anyone with information are asked to call Pc Clements on 101.