Michelle Obama Touches Down At Stansted

US first lady Michelle Obama has arrived in the UK, landing at Stansted airport last night.

She was wearing a blue and yellow lacey dress. The first lady was greeted by US military families as she stepped off the plane at Stansted, followed by her mother and two daughters.

While here, she will meet Prince Harry and David Cameron on the first of a two-day visit to the UK to promote her charity work.

Mrs Obama is visiting Britain to discuss her campaigns for girls' education and better support for military families.

She will host an event at the Mulberry School for Girls in Tower Hamlets in east London to discuss joint work between the two nations to boost education for adolescent girls across the world through the Let Girls Learn initiative, championed by her and her husband, US president Barack Obama. 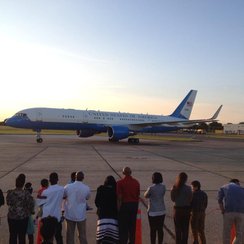 Pupils at the single-sex comprehensive will get the chance to grill the first lady - along with former prime minister of Australia Julia Gillard, who chairs the board of the Global Partnership for Education.

Writing in the Financial Times, Mrs Obama cited figures suggesting more than 62 million girls were out of school across the world, which she described as ``a heartbreaking injustice''.

Girls faced obstacles to education such as forced marriages, early pregnancies, abuse and sexism, she said.

``That kind of life is unthinkable for the girls in our lives, so why would we accept this fate for any girl on this planet?'' she wrote. ``This week I will join Prime Minister David Cameron in London to begin to answer that question, and announce a series of partnerships between the US and UK to educate adolescent girls in developing countries around the world.''

She praised the UK as a ``global leader'' for girls' education and said one joint scheme included a 180m-dollar investment in the Democratic Republic of Congo.

She added: ``In addition, our development agencies and two of countries' leading universities will collaborate on evidence-based research to determine the best ways to educate adolescent girls. And British and American partners will work together to support teacher training, girls' leadership camps, and other community-based programmes in developing countries.

``Combined, these efforts total nearly 200m dollars - but, given the scope of this challenge, even that is nowhere near sufficient. Girls' education is a global issue that requires a global solution.''

The White House said Harry was hosting Mrs Obama two years after attending a tea for military mothers with her in the US.

Her chief of staff Tina Tchen said: ``He was wonderful and it was wonderful to have him here. And we hear from his staff that he is happy to return the favour.''

Ms Tchen added that they would be able to talk about ``that shared interest that they have on military families''.

The Joining Forces campaign - another of those spearheaded by the first lady - ``works hand in hand with the public and private sectors to ensure that service members, veterans and their families have the tools they need to succeed throughout their lives''.

After London, the party will fly on to Italy to meet US armed services families based in Europe and to visit the Milan Expo as part of the third strand of her work, encouraging healthier diets for children.