New Thames Crossing - To Be A Tunnel?

Plans for a new multi-billion pound road link across the River Thames between Essex and Kent have been announced today.

Highways England say the new road will unlock massive economic benefits for the region and the whole country, relieve congestion at the existing Dartford Crossing and improve the resilience of the road network by providing a new alternative link across the Thames.

In 2013, two locations were shortlisted for a new bridge or tunnel across the river: one near the existing Dartford Crossing (known as Option A) and the other linking the M2 with the M25 via the A13 (known as Option C), with a possible further link to the M20 (Option C Variant).

Since then, Highways England has been carrying out detailed work with a wide range of stakeholders to assess the shortlisted options and develop possible routes at each location. This evaluation is now complete, and Highways England is recommending a new road crossing at location C through a bored tunnel. 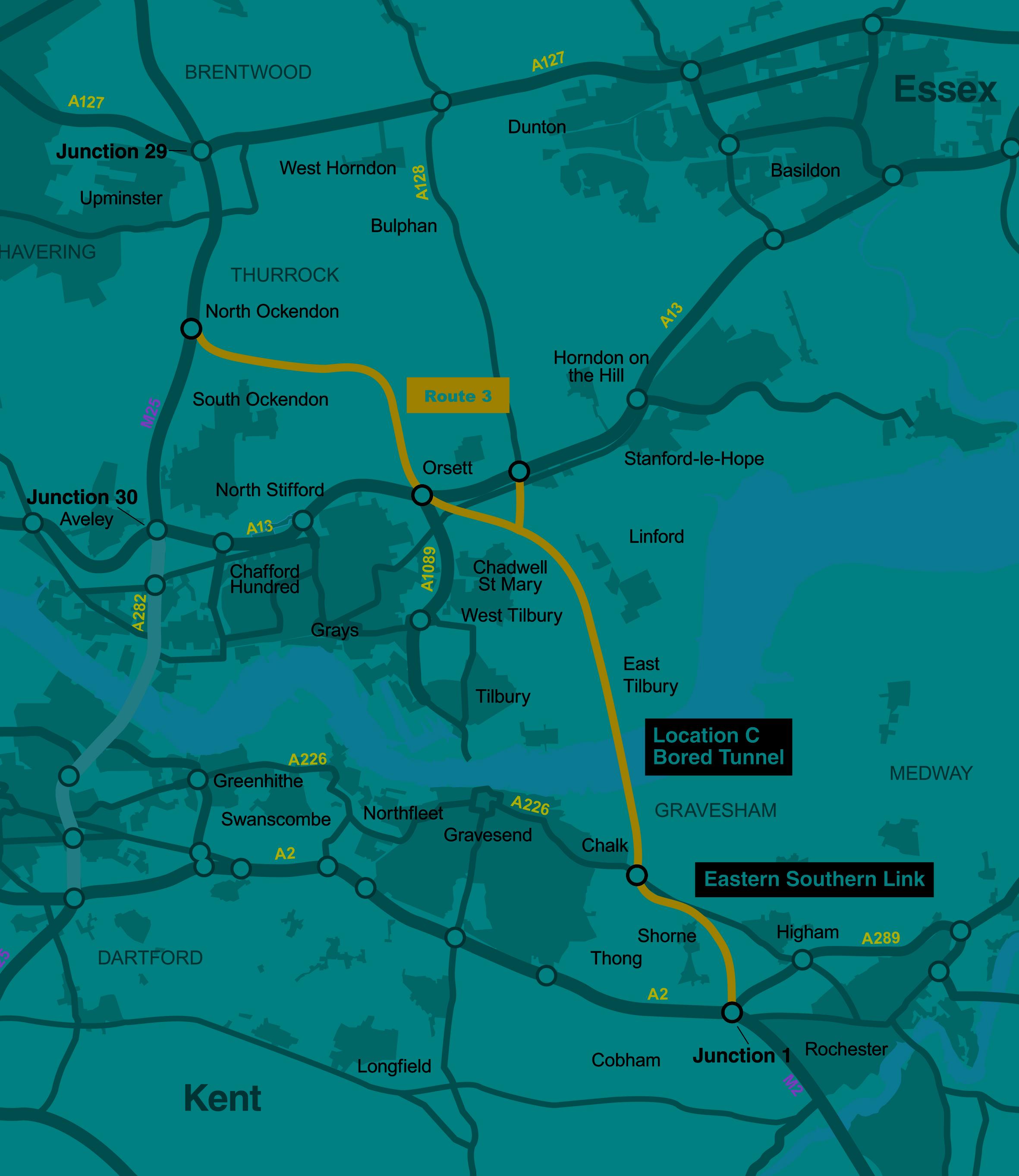 The proposed scheme would run from the end of the M2, crossing the river just east of Gravesend and Tilbury and joining the M25 between junctions 29 and 30. It will be the first new crossing of the Thames east of London since the Queen Elizabeth II bridge opened at Dartford 25 years ago.

"Roads are key to ensuring the nation's prosperity. As part of our long-term economic plan, we are making the biggest investment in roads in a generation.

The government is committed to delivering a Lower Thames Crossing which will increase capacity and provide better, faster journeys across the Thames.

Once complete it could add over £7bn to the economy by increasing investment and business opportunities, and create over 5,000 new jobs nationally."

"Deciding where the new crossing should go is a vitally important decision, and we've been working hard to identify solutions that strike the best balance between improving journeys, getting value for money and managing environmental impact.

Our assessments have shown that Location C provides double the economic benefits of Location A as well as a clear alternative route to the Dartford Crossing, reducing congestion and improving resilience of the road network. And by choosing a tunnel rather than a bridge we can minimise the effects of the new road on the environment.

There are important choices to be made. As well as inviting comments from the public about our recommendations, we have identified three routes for the new road to the north of the river and two routes south of the river. We welcome views on them all.

This consultation is your chance to have your say on a once-in-a-generation, multi-billion pound investment that will have wide ranging effects for decades. I encourage anyone who would like to find out more to check out the consultation materials or come and see us at one of the public exhibitions we'll be hosting."

There will be 24 public exhibitions, held at venues across Kent and Essex. All responses will be taken into consideration before a final decision is made by the Government later this year.

For more information about our proposals (including a video summarising them) and the public exhibitions, and to provide your views you can visit www.lower-thames-crossing.co.uk or follow @lowerthames on Twitter.