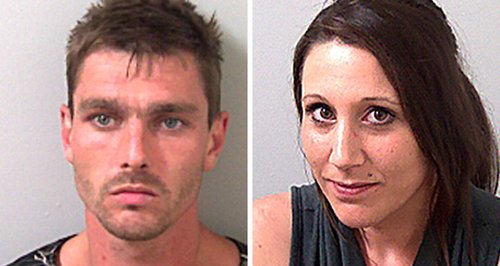 Two people from Essex have been jailed for a total of 25 years for an unprovoked acid attack which left a man with serious chemical burns.

Ashley Russell, 30, of Sunnedon, Basildon, and Christina Storey, 32, of Brook Court, Rayleigh, (pictured) had each denied throwing a corrosive fluid at Mr Pidgeon with intent to cause grievous bodily harm.

But they were found guilty by a jury at Basildon Crown Court on Thursday following an eight day trial, Essex Police said.

Russell was jailed for 17 years in prison while Storey was sentenced to eight years.

Detective Inspector Chris Rose said: "I am pleased that the jury have found Russell and Storey guilty of this appalling and unprovoked attack.

"This has been a long and difficult investigation for Darren and his family and I hope that this verdict can provide them with an element of closure and the knowledge that justice has been done.

"It should also send a message to anyone considering carrying out this type of crime that they will be found and put before the courts."