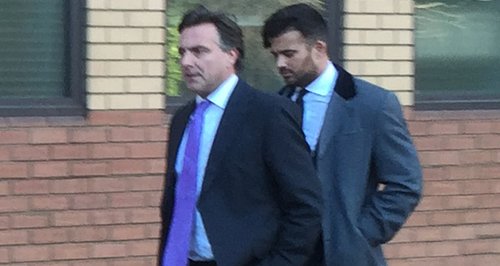 The Only Way Is Essex star Michael Hassini kicked out at a woman detention officer while in custody for drink driving, a court has heard.

The 22-year-old (pictured right arriving at court) appeared at Hammersmith Magistrates' Court facing a charge of assault by beating, which he denies.

The reality star allegedly kicked out at a detention officer during a routine welfare check while in custody at Charing Cross police station.

Hassini, from the Pilgrim's Hatch area of Brentwood, was arrested at 3.50am on the morning of August 15 and at 5.01am gave a breath test, which was recorded at 92 micrograms per 100 millilitres of breath - more than double the drink-drive limit of 35 micrograms per 100ml.

He was placed in a cell where custody staff were required to check on him every 30 minutes.

A custody form recorded the star as having "glazed eyes" and being "slightly drowsy".

Two detention officers, who entered the cell shortly after 7am, told the court Hassini swung at them and kicked the woman officer, resulting in bruising.

Nick Barraclough, defending, suggested Hassini was asleep throughout the welfare check and the kick was made while he was in a "stupor"

The court heard Hassini, who grew up and went to school in Essex, had previous convictions for driving without due care and attention and failing to stop to report an accident.