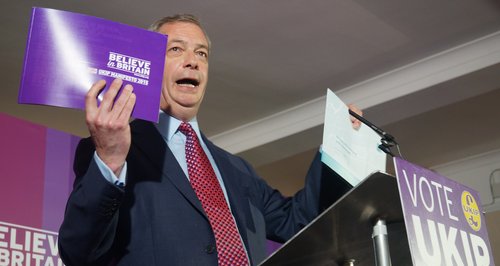 UKIP have launched their official manifesto for the General Election here in Essex.

Nigel Farage arrived at The Thurrock Hotel in Aveley this morning to announce the party’s plans and revealed the 76-page manifesto which features both European and domestic policy.

In the introduction – a spokesman said Thurrock as a location was chosen for a reason, mentioning the party’s recent successes in the area’s local elections.

In his speech Farage said that the party would raise money by scrapping HS2 and leaving the European Union.

The party also plans to re-visit the Barnett Formula – which sets public spending across the UK – to give people in England and Wales “a better and fairer deal.”

Mr Farage said that UKIP’s policies advocate “common sense and compassion” with policies including spending an extra £12bn on the NHS and abolishing inheritance tax.

Supporters of the party booed a journalist who challenged Mr Farage over why the manifesto only includes one picture of a person who was not white.

When asked about immigration the party leader said, “UKIP is not anti-immigration.

“Immigrants are not the problem, it's our immigration system that's the problem.”