A woman whose American bulldog mauled to death a three-year-old boy in Halstead has been spared jail.

Dexter Neal died in hospital after being bitten by Jade Dunne's dog Ruby at her home on the afternoon of August 18 last year.

Dunne, 29, pleaded guilty to being the owner of a dog dangerously out of control, resulting in death, at an earlier hearing.

She was sentenced to 12 months in prison, suspended for two years, at Chelmsford Crown Court on Tuesday.

She was also disqualified from owning a dog for 10 years and ordered to complete 100 hours of unpaid work.

Judge Karim Khalil said: "Nothing I do or say hereafter can diminish the pain that must be felt by the Neal family for the loss of little Dexter aged just three years old.''

Dunne, formerly of Parker Way, Halstead, and now of St Mary's Road, Kelvedon, appeared tearful throughout the hearing, which was attended by members of Dexter's wider family but not by his parents Pamela and Andrew.

The dog was seized by officers and destroyed after the attack, and the court made a formal order for destruction for the record.

Kate Davey, prosecuting, said Dexter's family lived around the corner from the defendant in adjoining Ronald Road, and their garden backed onto hers.

Dexter would often play with the Dunne children and would be picked up over the fence to save him walking round, but on this occasion he walked around and through the lean-to where the dog was kept, beside the Dunnes' home.

The Dunne children wanted the Neale children to go round and play, Ms Davey said.

The dog did not react when Dexter's sister and one of the Dunne children walked past, but went for Dexter who was following behind them.

"Very quickly as Dexter walked in he went to walk past the dog,'' said Ms Davey. "The dog pushed Dexter to the floor. The dog then bit Dexter's neck more than once and there were bites to the back of Dexter's head.''

She said Dexter, who was scared of dogs, bled "copiously'' and once he was knocked down he could not get back up.

"Dexter did absolutely nothing to provoke the dog,'' she said. "There's no question of teasing or anything else.''

She said Dunne came through from the kitchen when she heard screams from the girls and hit the dog repeatedly with a tea towel, which had "no effect'' on the animal. 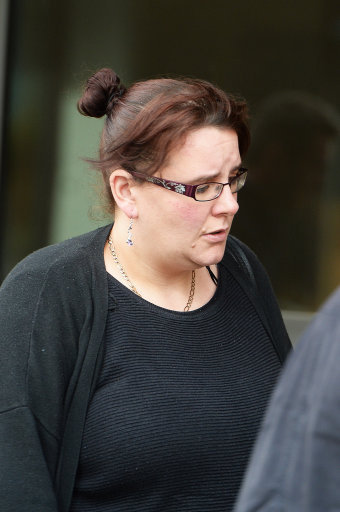 A neighbour who heard a commotion managed to grab the dog's collar, haul it away and restrain it until emergency services arrived. He said the dog had "lost its ferocity'' by this point.

He was airlifted to Addenbrooke's Hospital in Cambridge where he died with his mother beside him.

Ms Davey said Dexter was a "well-loved little toddler'' with a "sunny nature'' who "loved his cuddles''.

She added American bulldogs are a "controversial'' breed but are not banned.

Ruby was a rescue dog who was rarely walked, had shown no aggression towards humans in the Dunnes' home before but "sometimes didn't like other dogs'' and had to be muzzled when walked.

The Neal children had seen the dog before but had no real contact with it as it was usually kept indoors while children were playing in the garden.

Ms Davey said Ruby may have exhibited "prey behaviour'', when a dog is not trained out of its wild instincts to attack, but suggestions the dog "barked or growled'' before it attacked were inconsistent with this.

"Dexter could have been in too close proximity,'' she said. "Of course at the age of three Dexter could not read the negative signs and had no chance to get out of the way.''

She said Dunne could not reasonably have foreseen the attack. The dog was destroyed as it exhibited "unpredictable behaviour'' while in the custody of dog experts.

Steven Levy, mitigating for Dunne, said: "She's very sorry that having a family dog has brought about the sad loss of Dexter.''

He said Dunne apologised, through him, to Dexter's family.

She is a single mother of three who was of previous good character, and she was remorseful, he added.

Ms Davey said the Neal family had installed a tall fence at the foot of their garden after the tragedy, and Dunne had moved away from the area.