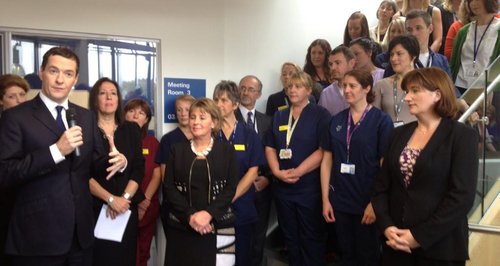 The Chancellor of the Exchequer, George Osborne, has visited Exeter’s centre of excellence in healthcare innovation, where he announced a new £150 million investment into technologies to revolutionise research into disease.

Mr Osborne revealed that £1.6 million of the Medical Research Council (MRC) cash pot will come to the University of Exeter Medical School, to fund a state-of-the-art facility that will unlock some of the hidden secrets of the genome. It is part of an overall investment by the partnership led by the MRC which totals £230 million.

As well as the funding announcement, the focus of the visit was around women in science leadership roles. Mr Osborne was accompanied by Nicky Morgan MP, Education Secretary and Minister for Women and Equalities.

During the visit, the two Ministers toured research facilities and met senior academics and managers. The visit was hosted by Quintiles, the world’s leading biopharmaceutical service organization. The Chancellor also awarded a Quintiles Women in Science student prize.

“The UK is a world leader in clinical research and the investment announced today will allow us to build on that position. Our long term economic plan is all about backing highly skilled sectors like this so they can expand. It’s fantastic to see the partnership here between Quintiles, Exeter University and the Royal Devon & Exeter NHS Foundation Trust and to meet with staff – many of them women in senior positions – who are leading the way in clinical research.”

Mr Osborne visited the Research, Innovation, Learning and Development (RILD) building, a partnership between the University and the Royal Devon & Exeter NHS Foundation Trust, which raises the profile of Exeter as a centre of excellence for clinical research and patient care.

Professor Janice Kay, Provost of the University of Exeter, said:

“This announcement recognises that Exeter is at the forefront of research into some of the biggest health problems of our time. This important investment will enable us to make significant advances in genomics research  in diabetes, neurological and other medical conditions. This visit also recognises our commitment to gender equality. Half of UK students are female, and almost half of UK PhDs are awarded to women, but fewer than one fifth of us hold senior academic positions. That must change.  Exeter has an excellent track record in redressing this. This year, our Medical School was one of only two medical departments to win the prestigious Athena SWAN Silver award, which recognises commitment to gender equality. We now have six of Bronze or Silver Awards across our departments.  We are proactive in promoting Science, Engineering, Maths, Physics and Medicine as rewarding and fulfilling careers, and in supporting all our staff to achieve their potential.”

“Quintiles is committed to achieving better patient outcomes by transforming clinical research. Improving the UK clinical research infrastructure will undoubtedly help ensure that the UK remains firmly on the global clinical research map. We were also delighted that the Chancellor met with us at our Peninsula Prime Site and presented our Women in Science prize. His visit recognised the work we are doing together with our partners in the University and in the NHS to drive excellence in clinical research.”

The winner of the Quintiles Women in Science Prize, Eleanor White, 22, is in her final year of the BSc Medical Sciences course at the University of Exeter Medical School. She won for her excellent networking skills, which helped give her access to clinical research projects, which she handled with outstanding professionalism. She was also commended for her proactive leadership role in a new committee to engage staff and students. She said:

“I’m delighted to win this award. Science is a rewarding and engaging career regardless of gender, and I’m a strong advocate of anything that can inspire people to get involved, or to consider science as a career.”

The new MRC funding will pay for new technology which will enable researchers to identify and analyse regions of the genome hidden from current methods for gene discovery, facilitating research into the functional mechanisms involved in disease. It is one of only four centres to host the equipment in the UK.

Professor Jonathan Mill, of the University of Exeter Medical School, who led the bid for the award, said:

“The last decade has seen tremendous advances in understanding about the role of genetic variation in health and disease. Despite this success, however, many regions of the genome remain hidden to contemporary DNA sequencing approaches. Our group at Exeter will acquire "third generation" DNA sequencing technology, which will enable us to fully characterise genomic complexity. We will also establish high-performance computing infrastructure needed to store and analyse this complex data.”

“We are very proud of all the superb work that goes on in the RILD and our strong partnership with the University on clinical research helps us to deliver high quality care for our patients.”