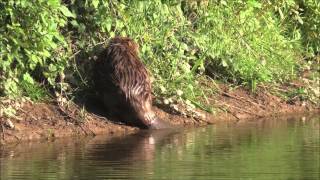 This amazing footage captures the babies of England's first wild beavers in over 400 years taking their maiden swim.

The family was discovered in the River Otter, Devon, last year and has been closely watched by experts from Devon Wildlife Trust ever since. Conservationists were delighted when they discovered the secretive mums were expecting and had their babies - or kits - in May or June.

And after weeks of hiding out in their burrow, their first-ever swim was captured on camera by a photographer who had been patiently waiting for weeks.

The adorable footage shows the mum pushing and shoving one of her babies along in the water during a swimming lesson.

One cute clip - shot at a secret location to protect their habitat - shows a reluctant kit being chased by its mum after it made a beeline out of the water towards the shore.

Beavers were native to Britain until the 17th century, when they were hunted to extinction for their fur and scent glands which were used for medicinal purposes.

They remained the subject of rumour until amateur wildlife cameraman Tom Buckley photographed them in the River Otter in February 2014.

Due to a fear that they would damage the environment around their home, they ran the risk of been rounded up to be sent to a zoo.

But Natural England confirmed that a licence will be issued to Devon Wildlife Trust to monitor the beavers in the wild earlier this year.

It is thought the beavers gave birth in late May or early June, and they spent their first few weeks hiding in their burrow.

Beavers give birth to an average of three kits, and when the animals are young they are buoyant in the water, which is why the video shows the mum shoving them in the water.

The Wildlife Trust is asking local people to stay away from the area to give the kits the peace and quiet they need at this early stage.