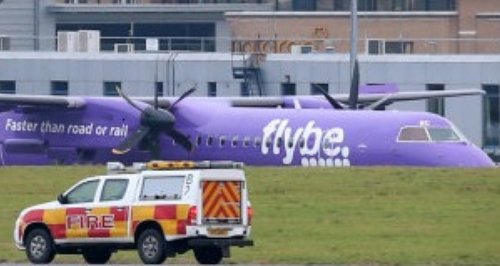 A passenger plane carrying up to 78 people came within seconds of catastrophe when it nearly collided with a glider at 3,000ft, a report has revealed.

The pilot of the Flybe aircraft was unaware of the mystery glider because a faulty radar failed to notify him it had flown into his landing path. Despite reporting the risk of collision as "high", the airline pilot managed to avoid disaster by just 300ft and safely landed the Bombadier Q400 propellor plane.

The incident took place 11 miles north-east of Exeter Airport in Devon as the service from Newcastle came in to land through "uncontrolled" airspace.

The pilot of the mystery glider has never been traced. A report by the UK Airprox Board concluded the near-collision, on January 2 at 1.30pm, was caused by a "late sighting" of the glider by the pilot and added that the primary radar system was out of service at the time.

It had developed a fault during the Christmas break but had not been repaired as the supplier was closed.

The airline pilot reported the risk of collision as "high" but the board decided there was insufficient information to categorise the danger.

A fellow pilot said: "It was very close and would have happened in the blink of an eye.

"Because the radar was broken the pilot would have been surprised to see the glider and would have had virtually no time to manoeuvre.

"It would have been pretty scary and quite unnerving for the pilot but the passengers wouldn't have been aware."