The Royal Clarence Hotel Fire - One Year On 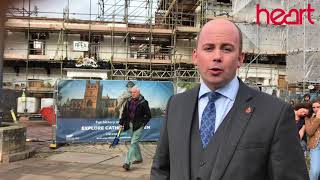 One Year since the Royal Clarence Hotel fire

The Oldest Hotel in England - The Royal Clarence Hotel in Exeter - was destroyed by fire a year ago.

The 28th October marks one year since the Royal Clarence hotel in Exeter was devastated by fire.

The fire started in the Castle Fine Art gallery before spreading to the Well House Tavern, and the Royal Clarence Hotel in Exeter's Cathedral Yard.

At the height of the fire, there were around 150 firefighters actively involved, with 207 firefighters at the scene at the same time during one hand-over period.

There were around 100 firefighters at the scene for the first three days of the incident around the clock. It's been described as the largest fire in Exeter since the Second World War.

Fire crews were at the scene for more than a week and 95 different fire engines were there for at least part of the time.

Now, a year on, and the owners of the Hotel - Andrew Brownsword hotels - say they're hoping to see the historic building rebuilt, and open again by 2019.

Structural engineers have been on site, working to save as many historical elements of the hotel as possible.

The Grade 2 listed building has now been made safe, and plans to rebuild the hotel have been revealed.

The rebuild is expected to take around 18 months, with plans to restore the distinctive facade of the hotel to it's former glory.