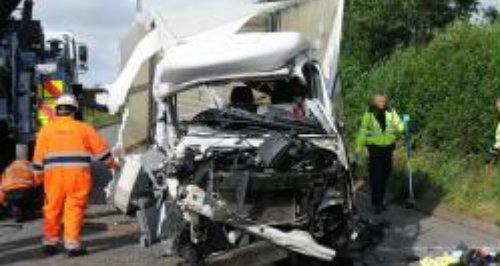 A white Mercedes Sprinter van and a MAN large goods vehicle collided approximately one mile from the Page Hill roundabout in Buckingham.

The carriageway was closed in both directions for six hours while officers examined the scene and the vehicles were recovered.

The driver of the lorry, a 43-year-old man from London, sustained life changing injuries.

He was taken to the John Radcliffe Hospital, Oxford, where he is in a stable condition.

The driver of the Mercedes Sprinter van, a 52-year-old man from Kettering, Northamptonshire, was taken to Milton Keynes General Hospital with a minor head injury.

He was released the same day after treatment.

Investigating officer, Sgt Simon Hills of the Roads Policing Unit based at Milton Keynes, said: “I am appealing for any witnesses to the collision to come forward or anyone who may have seen the Mercedes Sprinter van in the Buckingham area prior to the collision, or a large distinctive red lorry and double trailer with built in crane on the back in the Milton Keynes area.

“If you have any information please contact the Thames Valley Police Enquiry Centre on 101.

“If you don't want to speak directly to the police you can contact the independent charity Crimestoppers anonymously on 0800 555 111 or online at www.crimestoppers-uk.org. No personal details are taken, information is not traced or recorded and you will not go to court.

“I would like to thank the public for their patience while the A422 was closed so we could carry out our investigations at the scene.”