Thames Valley Police have issued a wanted notice for a man with links to Bedford, after an attempted murder in Reading, Berkshire.

The victim, a 28 year-old man, was stabbed while in Sidmouth Street in Reading on Boxing Day afternoon, 2015.

The victim sustained wounds to his chest, including a punctured lung.

He was treated at The John Radcliffe Hospital in Oxford but has since been discharged.

It is believed that Q has links to Bedford, Reading and Wandsworth.

A second image has also been released (below, left) of an unidentified man who is also wanted in connection with the attempted murder. It is believed he is in his twenties and may be known as Diego. 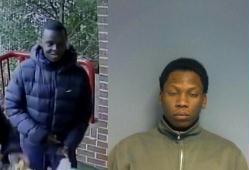 Both men are black, about 5ft 8ins and of medium build.

"I would appeal to anyone with any information about the whereabouts of Q Johnson, who is also known as Ricky or Jamie Sampson, to contact police immediately.

I would also appeal to anyone who recognises the second man, who we believe is known as Diego, to make contact with the police as soon as possible.

If you are harbouring either of these men then you could be committing a crime, so it is vitally important that you contact us now. The easiest way to do this is by visiting your nearest police station or by calling 101.

Members of the public are advised not to approach either men, but instead call 999.

If you do not want to speak directly to the police you can contact the independent charity Crimestoppers anonymously on 0800 555 111. No personal details are taken, information is not traced or recorded and you will not go to court."