The driver of a coach, involved in a crash which killed three people on the M1 near Flitwick yesterday, has been arrested.

The double decker coach hit the Audi A3, around 6.45am yesterday.

The northbound carriageway of the M1 between J12 and J13 was closed for several hours, but reopened just after 2pm.

The three men in the car, who were pronounced dead at the scene, were taken to Bedford Hospital south wing and inquests will open and adjourn in due course, after which they will be named. Two were from Buckinghamshire and one was from the London area.

A fourth man who was in the car remains in the John Radcliffe Hospital in Oxford with serious injuries. He is also from Buckinghamshire. 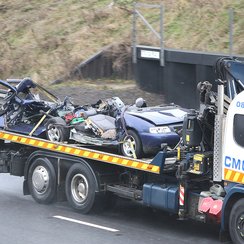 None of the young people in the coach, which was travelling from Kent, were hurt. The coach driver was arrested in connection with the incident and taken to Luton Police Station where he is being interviewed.

Police continue to appeal for witnesses to the incident which happened between junction 12 and 13 northbound at 6.46am.

Anyone with information can contact police, in confidence, on 101 or Crimestoppers, anonymously on 0800 555 111.