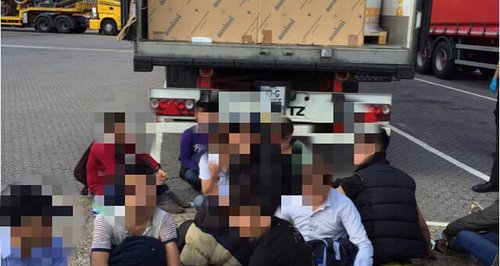 After 17 suspected illegal immigrants were found hidden in a lorry near St Albans at the weekend, a local cafe owner describes the conditions migrants are often found in.

Donna Morfett runs a local cafe and says it's a common occurrence there, close to junction 9.

"It can be women and children as well - they really are very scared when they get off so they're not intimidating at all."

Donna also spoke of one occasion when a group of migrants were found in a refrigerated lorry.

"There were children, women. They'd been in a cold lorry for I think it was about 17 hours.

"So they were very thirsty, tired, hungry and poorly."

The group were found by police stowed away in a lorry on the M1 after a member of the public reported seeing suspicious activity in the vehicle.

A member of the public called police shortly after 4pm on Saturday to report suspicious activity on a lorry on the M25.

The police spokesman said: "Eighteen people who are believed to have entered the UK illegally on the lorry were taken into custody for their safety.''