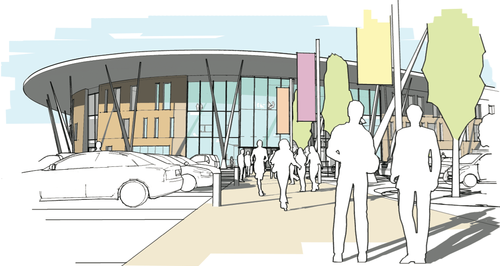 Plans for a £14m new National Badminton Arena for Milton Keynes have been put on hold today as funding runs out.

Badminton England say they're determined to achieve its ambition to relocate its national headquarters and develop a new state-of-the-art National Badminton Arena.

In a statement Badmington England said:

"The 2,000+ seat, 17-court Arena received full planning approval in the Spring of 2013 and since then significant work has been undertaken with a range of stakeholders to finalise the land transaction on the current site in Bradwell Road to ensure the maximum value is transferred into the new facility.

The project was also dealt a large blow earlier this year with the combination of a reduced land offer and a rise in building costs which has created a funding gap that we are working hard to close.

Adrian Christy, Chief Executive, said: 'The vision to relocate the NBC and develop an Arena facility is one that is hugely exciting for English badminton. It is a once-in-a-lifetime opportunity to create a facility that will not only give our players a world class training environment conducive to the conditions they face most weeks of the year when they compete, it will increase the number of courts we currently have by more than 100% thereby enabling us to satisfy the demand from those who love to play badminton, and it will help us significantly in our attempts to grow our own revenues and become less reliant on grant income at a time when there are increasing pressures on the public purse.

But all that said, this is a hugely challenging project and I for one do not underestimate how tough a challenge it is. While great progress has been made on the complex land transactions, our attention is now focused on securing the right financial deal that will give us all the confidence that we can bring the vision to reality.

Whilst this is a project that provides an opportunity to improve our fortunes on and off the court, including new revenue opportunities that would be invested into the wider aims of BADMINTON England, it is critical that we ensure the ambition is not overtaken by unmanageable risk."

Badminton England brought forward planning applications on 4 September 2013, for a new national badminton arena and community sports facility at the Bowl, to be largely funded from residential development at their existing facility at Loughton Lodge.  The  applications were unanimously approved by the Council's Development Control Committee, which also agreed to forego affordable housing and certain other planning obligations that would otherwise have been due on the Loughton Lodge site in order to support the Badminton England development.

The Council has since sought to facilitate the Arena project in every way that it could, through:

We remain committed to supporting the development of sport in Milton Keynes and the upcoming Rugby World Cup programme is testament to this commitment.  We are also due to open a new community sports facility later on this year which will target badminton participation through the use of two brand new courts.

The Council is also strongly supporting the development of the Bowl through the Milton Keynes Development Partnership.  This includes maximising the use of the Bowl for both sporting and leisure activities for or the benefit of Milton Keynes citizens.

Cllr Pete Marland - Leader of the Council said: "Obviously this is a huge blow, particularly as we put so much work into this project. Unfortunately, we've been stymied by events out of our control.

That said, Milton Keynes is nothing if not resilient, and we've still got all the key credentials to cement our place as an international sporting city.  We will continue to throw ourselves into our role as  a Host City for Rugby World Cup 2015, which is going to be massive for Milton Keynes and quite literally a 'game changer'."

Cllr Edith Bald, Leader of the local Conservative party, said: "The news from Badminton England is very disappointing, especially as the Council bent over backwards to make this happen.  However at the end of the day the sums could not be made to add up so Badminton England have done the right thing.  We still have the facility at Loughton Lodge and I sincerely hope this will continue."