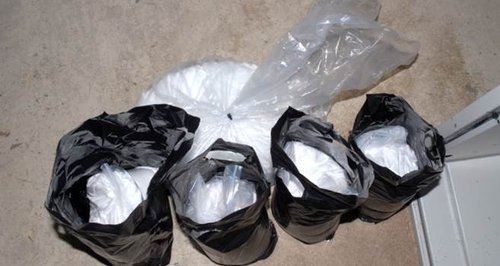 A Northamptonshire gang who hid cocaine and heroin worth almost £11m in homes and buildings across the East Midlands have been jailed for a total of 71 years.

The gang, led by Nicholas Riviere, of Rushden, sourced the drugs in London from an Albanian organised crime group who imported the high purity cocaine and heroin into the UK.

Riviere and his associates became the subject of an investigation by Northamptonshire Police and the East Midlands Special Operations Unit in July 2013.

Hart used his taxi to transport and distribute the drugs, and to avoid the attention of police, and also found a garage on Palk Road, in Wellingborough, to store them.

Edghill helped move both cash and drugs, while Ovens managed a smaller scale drugs distribution network and was supplied by Hart.

Their illegal enterprise began to fall apart in May 2014 when seven members of the Albanian gang were arrested by the Metropolitan Police as they completed an importation into the country.  Officers recovered 40kg of cocaine and 8kg of heroin.

The following month, Riviere, Lovell and Hart were seen to attend a clandestine meeting in the Vauxhall area of London. There they met with Marco Varone and Fred Carvalho, who acted as wholesale suppliers of controlled drugs in the London area.

A little while after leaving the meeting, Hart was stopped by police and found in possession of 1kg of high purity cocaine. A warrant was executed at the garage on Palk Road where four bank safes were discovered, containing 2kg of cocaine, 1.5kg of heroin, 115kg of cutting agents and £34,000 in cash.

Another search was conducted at Hart’s partner’s home, in Weir Close, Wellingborough, and a further £107,000 in cash was found by officers.

A total of 18 people linked to the investigation were subsequently arrested in Leicester, High Wycombe and Northamptonshire. Searches of 21 premises resulted in further discoveries of cocaine, heroin and £70,000 in cash.

Carvalho’s home in south London contained equipment for the mixing and pressing of adulterated cocaine.

The street value of drugs seized during the operation were estimated at £10.5m worth of cocaine and £343,000 of heroin.

Riviere, Lovell, Hart and Edghill were each charged with two counts of conspiring to supply class A drugs, one count relating to cocaine and the other to heroin.

Ovens was charged with conspiracy to supply cocaine only.

Varone was charged with supplying cocaine, and Carvalho faced two counts of being concerned in the supply of cocaine and being in possession of cocaine with intent to supply.

Keri Marks, from Wellingborough, was arrested for money being in her possession, a result of her partner Stuart Hart’s criminality. She was charged with possessing criminal property.

Karen Riviere, also from Wellingborough, was charged with four counts of converting criminal property. These related to purchasing properties using the proceeds of crime from her son Riviere. A further charge was bought relating to her using money to pay off the mortgage of a property.

All seven men and the two women, who pleaded guilty to the charges, appeared for sentencing at Northampton Crown Court today (Thursday, 4 June).

Her Honour Judge Tayton, in sentencing, said: “Such Class A drugs as found in this conspiracy are both malicious and addictive. They ruin the lives of addicts and their families.

“In my view the evidence shows that this was a substantial, sophisticated and robust conspiracy in which importation of high purity drugs were received on a regional basis and cut to be sent to gangs in Leicester, High Wycombe as well as local operations in the Wellingborough area.”

Detective Inspector Mark Pattison, from Northamptonshire Police, said: “Tackling drugs activity is a key objective for us. Targeting organised criminality like this, impacts widely on our communities and as a consequence results in significant low level crime as well.

“As a result of successful working with our east midlands forces as well as other forces we can demonstrates through cases like this that we will come down hard on those involved in criminality.

“I am pleased with the outcome of this case.”

“I would like to thank my officers for their hard work and dedication, and all those involved across the country that assisted in this investigation. The sentence received by this group illustrates the serious nature of the offending and the dim view that the Criminal Justice System takes on those involved in the trafficking of dangerous, controlled drugs.”