A Northamptonshire policeman has become an internet sensation after he was captured on camera walking arm-in-arm with an elderly man who had been struggling with his shopping.

The image, which was taken by a passer-by, shows PC Chris Stevens of Northamptonshire Police carrying the heavy shopping of an unknown gentleman in Kingsthorpe. 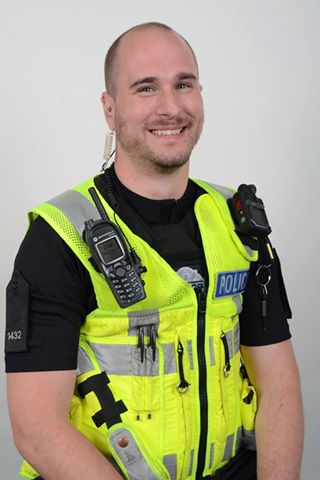 The man had caught the wrong bus and had been struggling to get home when he was spotted by Mr Stevens leaning against a wall.

The picture, which has since gone viral, has been shared almost 40,000 times on Facebook, with many people commending the officer for his actions.

After being brought to the attention of Northamptonshire Police they identified the officer on their Facebook page.

Mr Stevens said: "I saw the gentleman leaning up against a wall, so went over to ask if he was all right.

"He said he'd been in to town shopping but got on the wrong bus and was struggling to get home. So I asked if he wanted some help.

"He said that would be good, so I took his shopping and he held my arm as we walked back to his house and we had a nice chat.

"His wife looked a bit shocked when she opened the door and I was there with him, but he was fine.

"It's nice that the police are getting recognition for doing good things, but it's nothing more than any of my colleagues would have done. These things happen on a daily basis up and down the country.''