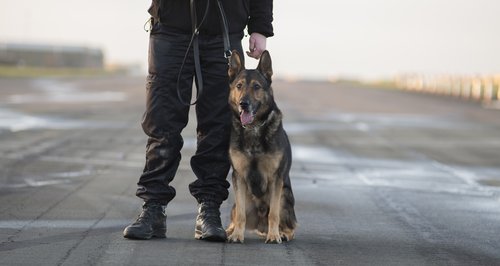 A police dog and its handler have been stabbed following a robbery in Stevenage.

As the driver moved off, the customer threatened him with what is believed to be a hand gun; The driver stopped the car and escaped before the offender took money from the vehicle and then ran off himself.

115am (Weds 5th Oct): Police called by a taxi company concerned about a request they had received for someone to be picked up in Rowland Road.

Police attended and a suspect ran from the scene and a dog handler and Police Dog Finn, gave chase.

In nearby Denton Road the Finn, and his handler suffered stab wounds. The officer received an injury to his hand. The dog suffered a wound to his head and chest and is currently receiving emergency specialist treatment.

Police also searched a nearby property, finding wraps of cocaine and a 35 year-old woman was arrested and is being questioned on suspicion of possession of class A drugs with intent to supply and an unrelated fraud matter.

Also there, a 17 year-old male from London was arrested on suspicion of conspiracy to rob and conspiracy to supply class A drugs.
Nearby - two people were also stopped in a vehicle; a 31 year-old man from Stevenage and 36 year-old woman from Luton.

They are both being questioned on suspicion of possession of an offensive weapon.

They all remain in police custody at this time.

"Safety of members of the public is paramount and following the initial call a significant number of resources, including firearms officers, the helicopter and dog units, were deployed to the area.

We also worked closely with local taxi companies to provide reassurance and crime prevention advice and I am grateful for their vigilance and co-operation.

The dog handler was taken to the Lister hospital for treatment and police dog Finn suffered severe injuries and vets are doing all they can to treat him.

Whilst I can imagine the high level of police activity in Stevenage overnight may have caused some concern to residents, I would like to reassure people that a number of arrests have been made, our investigations are on-going and there will be increased high visibility patrols in the area.

If you saw any suspicious activity in the area or have any information which could assist our inquires I would ask you contact police immediately."

Anyone who has any information which would assist the investigation should call the Herts Police non-emergency number 101.