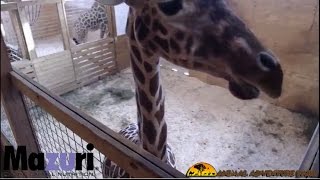 April the giraffe has the internet of tenterhooks, as she gets ready to give birth.

It should have been the feel-good story of the web. But things went awry when the Animal Adventure Park in New York set up a livestream of a pregnant giraffe, April, who was due to give birth.

Some spoilsports reported the livestream for explicit content, so it was briefly taken down. They say that no press is bad press, and so it has proved for April, as interest in the stream rocketed when it was relaunched.

April has become a YouTube celebrity, with more than 30 million viewers tuning into her livestream.

Yet the giraffe still hasn’t given birth, despite being due last week. At the time of writing, more than 58 thousand people are currently watching the livestream.

The Animal Adventure Park posted a Facebook update at the weekend, announcing: “April has us on our toes! then our heels, then our toes, then our heels! Major changes have been noticed in her back end, but from hour to hour we are see a different state… Major baby kicks continue.”

We’ll stick our neck out and say we think this story will have come to its conclusion by the end of the week. And we’ll definitely be keeping our eyes on the mother’s progress. Good luck, April!

Omg I was really just watching April the giraffe for a couple hours again...
wtf is wrong with me?