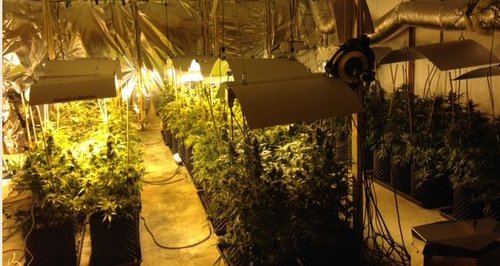 Cannabis with a potential street value of £800,000 has been seized by police in Churchdown and Cheltenham this week.

Officers were responding to a call from the public reporting a strong smell of cannabis from an industrial unit in Meteor Business Park, Churchdown.

They searched the premises on Mondayand discovered a large hydroponics cannabis production facility.

A large number of plants were seized and two men aged 50 and 53 were arrested, one from a house in Brookfield Road, Churchdown and another in Thistledown Close, Cheltenham, where another large quantity of cannabis plants were seized.

PC Matt Rollason of Tewkesbury Police Station said: "This was dynamic operation with an excellent result made possible with the support and assistance of the local community, which will always be an invaluable aspect of policing. We are grateful to the member of the public who contacted us to report their suspicions about this activity.

"We would urge anyone to come forward when they suspect possible criminality."

A photo of the cannabis facility in Meteor Business Park is shown.