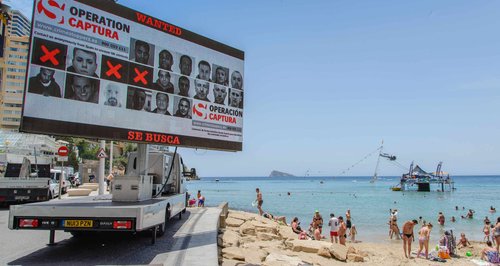 A big screen broadcasting the faces of 18 of Britain's Most Wanted fugitives is being taken on tour around British ex-pat hot spots in Spain.

They include 32 year old Mohammed Jahangir Alam, who is wanted by Gloucestershire Police for rape and sexual assault.

Alam, who is from Bangladesh, arrived in the UK on a temporary visa in October 2007. He lived in Bradford before moving to Cheltenham in 2008. During this time he physically and sexually abused one victim.

Alam was convicted in March 2010 and sentenced to 14 years in his absence. He is 5ft 8ins tall.

It is believed many of the 'most wanted' are hiding among British communities in popular ex-pat areas - including Benidorm, Malaga and Puerto Banus.

The digital screen, attached to the back of a van, is touring all these areas and parking outside nightclubs, bars, British supermarkets and restaurants It is hoped that going direct to the fugitives' back yards and putting their faces in plain sight will help to flush them out.

Lord Ashcroft KCMG PC, the Founder and Chair of Crimestoppers, said: "Operation Captura has proved a huge success since it was launched in 2006 and the majority of individuals on our most wanted list have been captured.

"However, there are still a number of criminals who are evading arrest. We must ensure these individuals are brought to justice."

Steve Reynolds, NCA Deputy Director, added: "We've caught 68 out of 86 fugitives on the Captura list and the rest know we won't stop until we catch them too.

"By taking our campaign directly into Spanish communities where we believe they are living and socialising, their lives will become even more uncomfortable. We want British expats and locals to help us by being extra eyes and ears and telling us what they know.

"These fugitives are wanted for serious crimes. Anyone who is helping them stay on the run, such as girlfriends, wives, family members back home, or criminal associates, should know that assisting them is an offence too.

"There may also be people in the UK with vital information on the whereabouts of these fugitives and we would urge them to get in touch."