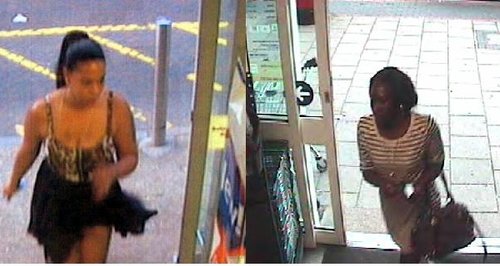 Police have released pictures of two women they want to trace over debit card fraud in Bushey.

A purse and bank cards were stolen from someone in the car park of Costco on Hartspring Lane at around 10am on Saturday 13 July 2013.

The victim has been approached by someone, who ran off with their purse.

The debit cards inside were then used to withdraw cash from the victim’s bank accounts and also make several purchases at local supermarkets.

Police have released CCTV images of two people they would like to speak to.

PC Pete Glover, from the Bushey Safer Neighbourhood Team, said: “I would like to speak to these two people as I believe they may have been witnesses to the incident or have vital information about the crime.

“If either of these are you, or you recognise them, please get in touch with police as soon as possible.”

Anyone with information about the incident is asked to contact police on the non-emergency number 101 quoting crime reference J2/13/714. Alternatively, you can call Crimestoppers, the independent charity, anonymously on 0800 555 111.