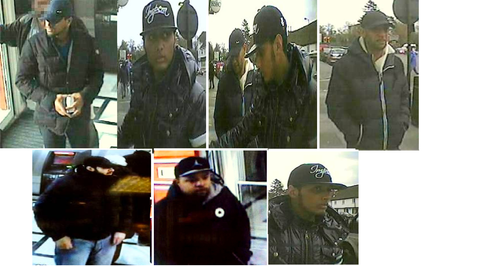 Police investigating a series of distraction thefts at cashpoints in Watford town centre are renewing their appeal for information.

The first theft occurred between 12.39pm and 12.50pm on Tuesday, November 26th at HSBC bank in Watford’s High Street. The victim was distracted by an offender who then withdrew £300 using the victim’s bank card.

The second theft happened between 12.50pm and 1.05pm on Tuesday, November 26th at a Lloyds Bank in Watford’s High Street. Again the victim was distracted by an offender, whilst another took the victim’s bank card. The offenders then later used the card to purchase a number of items.

The third theft occurred at 1.45pm on Thursday, December 5th at HSBC cash point on the High Street. Again the victim was distracted by an offender, whilst another took the victim’s bank card. £460 was then withdrawn from his account.

The fourth theft occurred between 10.45am and 10.55am on Thursday, December 12th at HSBC bank in Watford’s High Street. In this incident, an offender distracted the victim whilst another offender stole the victim’s bank card. The offenders tried to later use the card but the transaction was declined by the bank.

All the victims have been aged around 70 and the thefts are being linked.

PC Priya Patel is investigating the thefts and told Heart: "Our investigations into this series of incidents continue and we have obtained more CCTV images of men who may be able to provide information that is vital to the investigation. If you recognise the men, or if you recognise yourself, please contact me immediately.

Our investigations have also led us to believe these men may be from the areas of Stanmore, Edgeware or Harrow.

We’ve increased patrols in the High Street in order to catch the people responsible. But in the meantime I would renew advice to people, particularly the elderly, to be vigilant when using ATM machines. Always shield your pin from view and be aware of anyone who is in the immediate vicinity. If you have a family member or friend who is elderly, please do pass on this advice."

Other advice to follow when using a cash machine:

·         NEVER disclose your Personal Identification Number (PIN) to anyone.

·         Always look around you when approaching and using the cash point, if you see anyone acting suspiciously call police.

·         If you think a cash machine has been tampered with call the police immediately and inform the bank.

·         Where possible, use a cash machine inside a bank or building society.