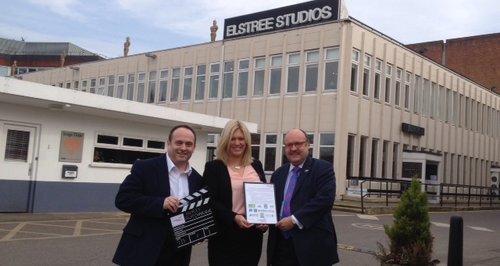 All eleven councils across Hertfordshire have come to together to sign a new Film Charter, which aims to bring more Hollywood film studios to the county.

The Charter is aiming to build on Hertfordshire’s reputation as a first-class filming destination for producers and directors from across the world, bringing further investment, income from screen tourism and more jobs.

Hertfordshire County Council and all ten of Hertfordshire’s District and Borough Councils have come together to sign it, along with Creative England - an organisation which works to grow businesses.

Last year, Creative England estimates that £8.6m was spent in Hertfordshire as a direct result of location filming with a single feature film bringing up to £42,000 a day into the local economy.

Through the Film Friendly Charter, Creative England wants to attract even more interest and investment in Hertfordshire by helping local authorities and film and TV production companies to work together, offering advice on Hertfordshire’s locations, providing links to available film crew and helping to arrange any permits required to film.

Hayley Armstrong, Production Liaison Manager at Creative England said: “Filming makes a significant contribution to Hertfordshire’s local economy and the county has a long association with some of the biggest names in Film and TV.  By signing of the Film Friendly Charter, Hertfordshire is giving a clear signal to the industry that the region is film-friendly. It also shows a strong commitment to encouraging the facilitation and development of film and television in the county.

“Just last year, we supported 79 productions to film on location in Hertfordshire including 19 feature films, and I look forward to seeing this number rise in the next few years.”

Hertfordshire has been home to many blockbusters in the past. The historic rural estate Ashridge features in Harry Potter, Les Miserable and Stardust, while Hatfield House is the backdrop for Band of Brothers, Batman Begins and Charlie & the Chocolate Factory. Down the road in Stevenage, the Bio Park was used for The Bourne Ultimatum’s CIA headquarters, while St Albans Cathedral appears in Johnny English, Incendiary and First Knight.

The county’s locations have attracted the industry’s biggest blockbusters for decades.

Chris Hayward, Hertfordshire County Council’s Cabinet Member for Enterprise, said: “The Charter is a celebration of Hertfordshire’s rich heritage and continued status as a popular destination for some of the biggest film productions.

“I’m delighted that Hertfordshire’s ensemble includes all the district and borough councils; it sends a clear signal that we’ll work together to do all we can to attract even more big film and TV productions into the county.

“Last year we promoted our Filming on the Highways Act through Parliament, giving the county council new powers to close roads for filming purposes, which has added to Hertfordshire’s reputation as a convenient and appealing location to film.

"I’m sure the Film Friendly Charter will further Hertfordshire’s reputation as the location filming destination of choice for producers and directors working in England.”

The highest grossing film of 2014, Paddington, was filmed in Hertfordshire.  Jonah Coombes, Location Manager on Paddington, said: “I really relished the opportunity to bring location and studio filming of Paddington to Hertfordshire because there is always such a collaborative, open minded and can-do approach.”