The six staff flew to the Caribbean island last week to assist in the international effort to rescue survivors in the aftermath the earthquake which killed and injured thousands.

Arriving back at their Maidstone base, team leader John Mazzey explained some of their duties:

"Our initial task was to concentrate our search and rescue efforts in the capital, Port-au-Prince where the UK International Search and Rescue (UK-ISAR) team rescued several people trapped.

"On Sunday we were sent to the town of Leogane, about 25 miles west of the capital, which was much nearer to the epicentre of the earthquake. We found houses that had been completely ‘pancaked’ and worked with local people who had either heard voices in the rubble or knew of people trapped inside.

"We experienced a major aftershock in the early hours of Wednesday morning but fortunately it did not harm our crews. Soon after, 15 members of UK-ISAR team flew by helicopter to Petit-Guave to carry out reconnaissance. They identified seven buildings that had sustained further damaged and cleared these buildings, while our firefighters resumed operations in areas of Port-au-Prince that had not yet been reached by search teams."

Successes of the Kent crews working with other UK teams while in Haiti, have included the rescue of a man in his 60s after several hours of tunnelling.

The man was thrown out of his bed by the earthquake and ended up under it. The bed seemed to have protected him and helped him to survive. After rehydration, the lucky survivor recovered well and was treated for minor injuries.

"The reception from the local community was very good and it was excellent to be able to help, but it is important that we are not a burden to the country and so we took our own food and accommodation. As soon as the rescue phase was declared over and our skills and training were no longer needed, we returned home.

"The team is very close knit and has worked together for a long time but we also made sure we talked about anything we’d seen or done. Our extensive ongoing training certainly prepared us for this and we will be discussing this with the rest of the USAR team once we’ve all had a chance to rest."

"I am extremely proud of the team from Kent and the impact they have been able to make in the aftermath of this terrible earthquake. They are truly special people to be able to work in these types of situations."

Based in Maidstone, the 14-strong team has been selected from existing KFRS staff and is trained to use specialist equipment capable of handling a range of major emergencies.

The team also forms part of KFRS’s Urban Search and Rescue response which has capability including kit to lift, cut and remove concrete and rubble from collapsed structures along with sophisticated equipment for finding casualties, including special cameras and listening devices.

The tools they use can penetrate reinforced concrete and metal to gain access to casualties and the use of shoring equipment allows team members to maintain a safe working position during rescues. 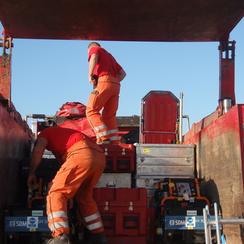 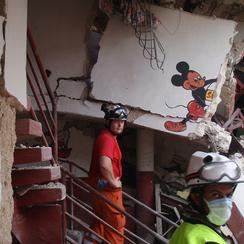