A man who savagely attacked an elderly person he had earlier befriended has been sentenced to life imprisonment with a minimum custodial term of 12 years.

75-year-old Cliftonville resident Ken Seymour, at the time, required 40 stitches to his face and suffered fractures to his skull and back following a vicious and sustained beating by Mariusz Dobkowski on Saturday 14 December 2013.

30-year-old Mariusz Dobkowski formerly of Eaton Road, Margate, fled to Belgium shortly after the attack but was tracked down by officers from the Kent and Essex Serious Crime Directorate who secured a European warrant for his arrest. 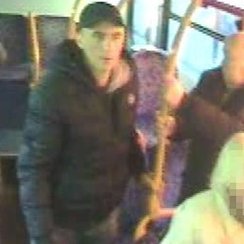 The court heard how Mr Seymour – who has no memory of the attack – had been socialising with friends in Margate on the day in question, and was waiting to catch a bus home. CCTV identified a man – later identified as Dobkowski – engaging with Mr Seymour at the bus stop and subsequently on the journey back to Cliftonville.

Dobkowski and Mr Seymour got off the bus together in Northdown Road, where they headed in the direction of Mr Seymour’s home address.

Some hours later, at about 8.45pm, a neighbour heard Mr Seymour shout for help and went to his flat to find him lying on his back and covered in blood. A table had been overturned and a number of Mr Seymour’s possessions were found broken on the living room floor.

He was taken to a London hospital where he remained for a month before being discharged on 13 January 2014.

A media appeal and poster campaign followed in the days after the attack, which led to the identification of Dobkowski.

Senior investigating officer Inspector Richard Vickery, of the Kent and Essex Serious Crime Directorate, said: ‘This was a brutal attack on an elderly gentleman who was incredibly fortunate not to have been killed by someone almost 50 years his junior.

‘Instead of facing up to the consequences of his actions, Mariusz Dobkowski ran away to Belgium and tried to carry on with his life while his victim lay in a hospital bed recovering from a number of serious injuries.

‘However, thanks to the tireless work of officers who were assisted by members of the local and Eastern European communities, Dobkowski was unable to hide for long.

‘Let me assure you that those who choose to commit violent and cowardly acts such as this will be relentlessly pursued and brought to justice.’