Medway Council's twitter feed has been targeted by hackers who declared free council tax and parking for all residents.

They took over the feed for ten minutes from 7.45pm yesterday. Several tweets were posted before being removed shortly afterwards.

One tweet said the feed had been taken over by "citizens of Medway", while another said, "First policy - free council tax for all. You won't need to pay any more council tax from now." 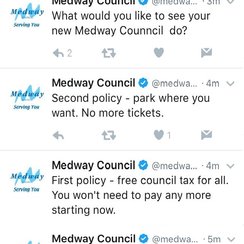 A Council spokesman later apologised and said an investigation into how it happened is underway.

Antonio Rudiger: Chelsea defender will continue to speak out about racism