Hundreds of supporters of the 25-year-old have turned out to mark her achievement in winning Great Britain's only gold medal in the skeleton at the Sochi Games.

She was waved off at Sevenoaks District Council's HQ before being greeted by some 1,000 children on her first stop at Riverhead Primary School.

The bus moved on to Knole Academy in Sevenoaks where Yarnold, from nearby West Kingsdown, was handed artwork by children and presented a sporting trophy to a pupil.

A large crowd greeted the Winter Olympic champion as the bus travelled to Sevenoaks town centre and slowly drove up the High Street. 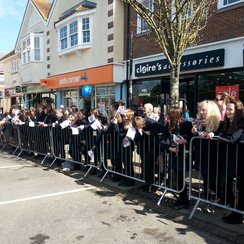 More than 400 children are due to turn out to greet the star when the bus stops off at Sevenoaks' Vine Cricket Ground - one of England's oldest cricket venues.

Yarnold will take a trip down memory lane later when she heads to her old primary school, St Michael's Preparatory School in Otford, to meet 600 children and parents.

Another school stop-off will follow before the bus travels to another of her old haunts, Brands Hatch race circuit, where she worked before her Olympic success.

Her final stop will be in her home village, at West Kingsdown Primary School, where hundreds of children will line up outside and pupils from each class will present her with a handmade gift.