A woman has died following a collision along the M20 which led to big delays on the motorway, Road reopened fully 15 hours later.

Kent Police was called to the incident, which involved a car and a lorry, at 5.11pm on Tuesday 14 November 2017.

It happened on the coastbound carriageway between Junctions 10 and 11 and involved a white Mini Cooper and a white and red Scania HGV lorry.

The female passenger travelling in the lorry died at the scene. The male driver was taken to a local hospital suffering minor injuries. The Mini driver was uninjured.

(Pic from Highways England of the traffic delays last night) 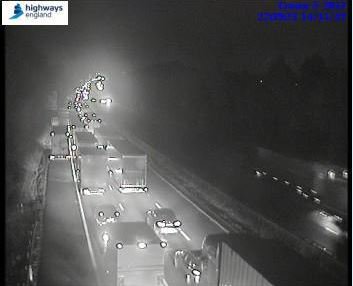 Anyone with information is asked to call the Kent Police Serious Collision Investigation Unit on 01622 798538 quoting MW/255/17.