This image appears in the gallery:
Tried And Tested Beauty Buys Heart Loves 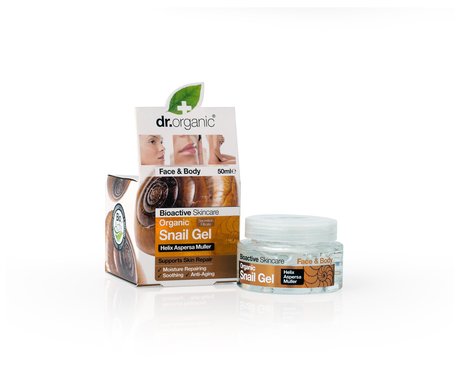 Not many know that snail secretions contain something called Helix Aspera Muller, which has antioxidant and skin-regenerative properties. Dr Organic has utilised this rejuvenating ingredient and mixed it with aloe vera to create their Snail Gel. Apply it on face and body as a moisturiser or on red spots, burns, cuts, scars and bruises to soothe the skin and speed up its regeneration. We used it as a face moisturiser and found it firming, moisturising and very easily absorbed. We also tried it on the face and body after waxing and it immediately got rid of the redness and stinging sensation caused by this hair removal method. And don't fret, no snail is harmed to make this gel: the slime they leave behind is simply collected on a glass tray in a safe environment. Free from parabens, chemicals, colourants and synthetic fragrances. Dr Organic Snail Gel is available from Holland and Barrett and priced at £19.99.