A 4 Year Old's Homework Has Left Everyone Stumped, Can You Figure It Out?

Cue a lot of confused faces!

Even though Christmas feels like a distant memory, we're now stuck in the limbo that is mid-January, which seems to go on forever.

It's hard getting back into routine and re-engaging the brain - especially when you have the additional burden of your kids homework to do.

And one mother has already found herself stumped at a worksheet aimed at four year olds, which shows images of objects that they have to label.

Annie Jordan from Plymouth shared the homework on her social media with the caption: "Right please someone tell me what the last one is, because I literally don't have a clue!" 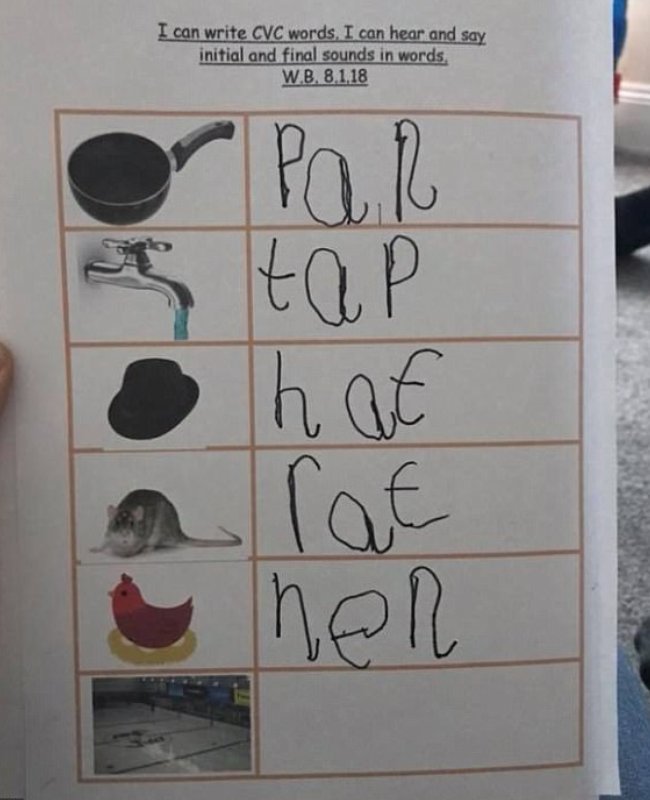 Each image on the worksheet depicts an object that is a "CVC" word - meaning the spelling is made up of consonant, vowel, consonant. The first five are pretty straightforward, but it's the last one is that's really confusing everyone.

READ MORE: QUIZ! Is Your Brain Older Or Younger Than Your Real Age?

Many social media users suggested "ice", but as this is a vowel, consonant, vowel spelling, it can't be right. Other suggestions came in the form of "net, wet and rink."

It took Annie to raise the question with the teacher who set the worksheet to finally get the answer, and she proudly alerted her confused friends in an updated Facebook status:

"Teacher confirmed it is RINK!"

Apparently "rink" counts as a CVC as it can be broken down into three sounds - r-i-nk."

WATCH! Boy Ruins Mum's Video As She Tries To Sing: