The This Morning star has her own edit with high street giant M&S and here's everything we know including the HUGE fuss around that leopard print dress.

Holly Willoughby has announced she is Marks & Spencer's latest brand ambassador and to celebrate the new partnership she has a womenswear edit landing in stores soon.

Here is everything we know about the exciting new collaboration so far including when it is released, what is in the collection and the leopard print dress that we predict will be a sell out!

Read More: Who will replace Holly Willoughby on This Morning while she is on I'm A Celeb?

Got some Monday morning news to share with you... @marksandspencer have always been part of my family and now they have asked me to be part of theirs. Super proud to be a M&S brand ambassador, my edit will be available online and in selected stores on the 27th of September... follow @marksandspencer on Instagram for more info #HollysMustHaves

What is Holly's new partnership with Marks & Spencer?

She is their latest brand ambassador which means she will be championing all things womenswear for the high street shop.

The collection will be shared using the hashtag #HollysMustHaves.

When will the new M&S collection be released?

Holly's 20 piece autumn edit will be in stores from 27th September.

The prices of the pieces in the collection range from £19.50-£99 and they have already given us a sneak peek of what to expect from the edit. 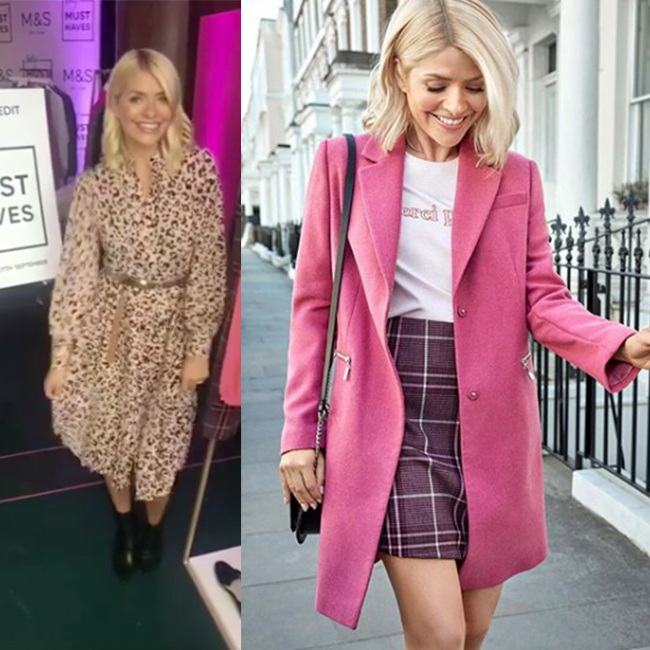 From the M&S and Holly's own Instagram accounts we know that it will include a gorgeous plaid skirt, pink coat, leopard print dress and many other bold patterns perfect for transitioning your wardrobe from summer to autumn.

Everyone is going crazy for Holly' leopard print dress

One particular item from the upcoming edit that everyone is going wild for is the leopard print dress Holly has been seen in on her Instagram account.

It's not available to buy yet and will be released with the rest of the collection on 27th September but fans are already raving about it.

One commenter said: "Love this leopard print dress! I hope I manage to get one! Won’t look as good as it does on you though!" while another said "I'm so excited for this!".