A man tweeted a video of himself 'breast feeding' his infant child - but people were horrified, and some even labelled it 'abuse'.

A young father has sparked controversy after posting a video showing him "comfort nursing" his baby daughter.

In the 8-second clip, published via his Twitter account, Christopher Brown, 20 (AKA Daddy Duke), cradles his little girl while she suckles on his nipple.

Clearly the infant has no idea that it's a male nipple, devoid of milk. 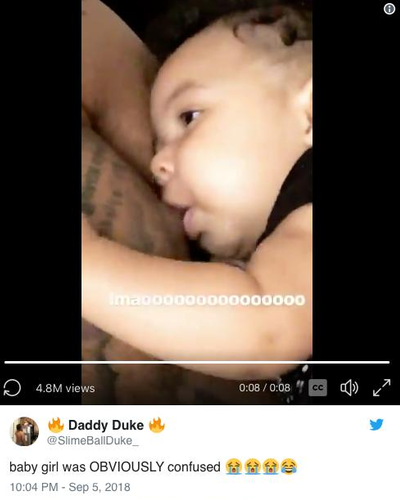 The video has been viewed almost 5 million times

The father added 'lmaoooooooooooooo' on top of the video, with the caption: "baby girl was OBVIOUSLY confused (four teary laughing emojis)"

After focusing on his daughter suckling for a few seconds, he then pans up to his face laughing and smiling.

He later posted that the little girl had woken up and instinctively started to suckle.

A moment of father daughter bonding that obviously provided much amusement to the dad.

However, other Twitter users were not so amused, with a wave of criticism aimed at him.

Skeeta Berry posted: "You want a baby to suck on your nipples for no reason! Weird."

While another user, Gary Goodridge, had a more severe viewpoint, saying: "This is child-abuse to the extreme. This man is a jerk off. Not cool brother not cool." 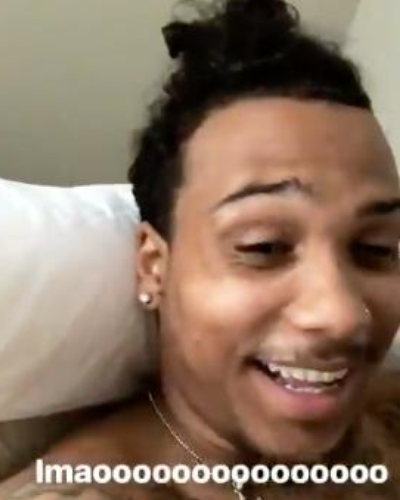 Mr. Brown was clearly amused by the incident

But many others found the video, which has been viewed almost 5 million times, endearing and defended Mr. Brown against any criticism.

Nikki Lynette was also keen to defend Mr. Brown, saying: "People talking about how it's 'wrong' and 'disturbing' are dumb as hell for being in they feels over an 8 sec video with a confused but loving dad NOT overreacting to his baby comfort nursing."

And BriutifulSoul also weighed in on the discussion, taking a positive view: "It's not weird it's sweet. It's one of those common moments every dad goes through with their baby, it's cute and funny."

Professor Amy Brown, author of The Positive Breastfeeding Book, spoke to the BBC about comfort nursing, that is the act of comforting a baby by providing an alternative suckling outlet (typically a dummy or pacifier of some kind).

"She told the Beeb: “Babies suck for comfort and some won't mind whether that’s a male or a female nipple. Socially and culturally it’s seen as odd, but, from a physiological viewpoint, it’s totally feasible."