A mum was furious after people watched her feed her six month old from the comfort of their seats.

A mum was forced to feed her baby standing up after commuters refused to give up their seat for her.

Kate Hitchens, 32, was travelling from Stratford, east London to Wickford in Essex with her 6-month-old son Charlie - but was astounded when no one offered her a place to sit.

When Charlie started grizzling, she realised that she was going to have to feed him stood up, a situation that she later admitted she found "uncomfortable and embarrassing". 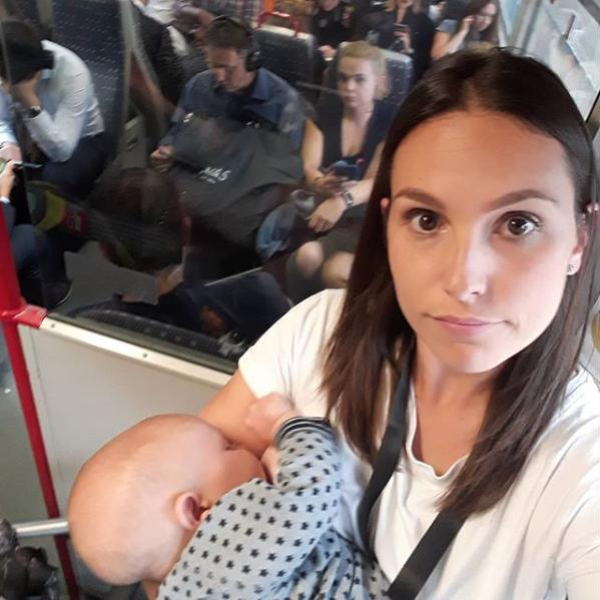 While breastfeeding him, she took a selfie to show the horror of her situation.

In the photo, which has been liked 900 times on Instagram, mum-of-two Kate can be seen staring in to the camera with Charlie gripping her, a sea of blurred faces behind them.

She captioned the shot: "On my way home from London on a packed commuter train and this is what I faced.

"What has the world come to that a mother has to stand up on a moving train breast feeding a wriggling and writhing 6 month old, 20lb baby?!

"The point here isn't just that I found it difficult because I was nursing (although that was bloody difficult!), but that not one person offered a mother carrying a small child a seat for around half an hour, or 3 stops!

"I could have asked, but I didn't. I felt silly. I shouldn't have to ask.

"Maybe some people didn't see. I know for a fact some did; they made eye contact and actually smiled at me. I was thinking stop smiling and offer me your seat please!

"One lady looked up from her book and immediately offered me her seat, another lady then sat in it and when the lovely lady said 'Oh excuse me I actually gave up my seat so this lady with a baby could sit down' the sitting lady shrugged, plugged her earphones in and closed her eyes!

"I hope not. I can somewhat understand not offering your seat to someone elderly; perhaps they might be offended you think they look old!

Read more: Mum furious after stranger scolds her 'out of control' son during Aldi shop

"I can understand not offering your seat to someone you suspect might be pregnant; maybe it's just their time of the month or perhaps they are just naturaly curvy and they aren't pregnant; perhaps you worry you might offend them.

"I cannot get my head around not offering a parent with a child a seat.

"Next time you see someone with a child on a train - if you're able bodied and fit and healthy please offer your seat to them!"

Kate later told the Mail Online: "I felt uncomfortable and embarrassed breastfeeding standing up on the busy train. Although I'm happy to feed anywhere he needs it, I do still try and be discreet and not show my breasts, wearing clothing designed for nursing.

"As the train moved he pulled and it hurt. I also felt uncomfortable myself as I accidentally exposed more of myself to the people standing around me than I usually would sitting down, trying to hold him wriggling in one arm whilst sorting myself out with the other hand was difficult."