Both parents are having their dream op to switch genders, but some people think it's a confusing situation for their young son.

This Morning viewers were left confused after a gender fluid couple revealed they would both be having gender reassignment surgery.

Parents Louise and Nikki Draven from Middlesbrough, appeared on the ITV show on Tuesday to discuss their plans and how they might affect their son, who they are raising as gender neutral.

Star Cloud is allowed to wear nail polish and has had no traditional gender roles placed upon 'him', although he was born male. 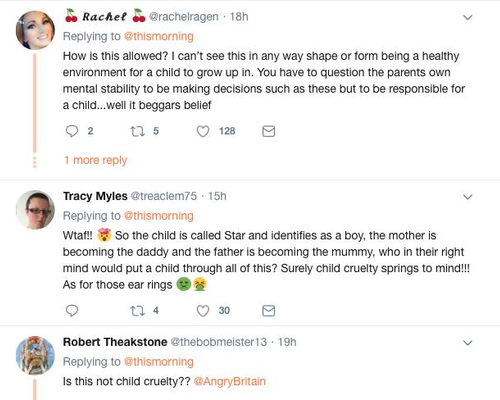 Meanwhile Star's biological father, who refers to himself as Louise and who Star calls mummy, is just a few months away from undergoing a male to female gender confirmation procedure.

Louise began preparations for the transition process in 2011, working on losing 16 stone so that she can have the op in December.

The couple explained to Phillip Schofield and Holly Willoughby that since Louise has managed to drop from 25 stone down to nine, she is having her penis, which Star refers to as a 'duckie', removed.

Nikki, who Star calls daddy, told the This Morning hosts: "He’s got a five-year-old's understanding. He knows mummy's going to a special doctor and is going to take her duckie away."

While Louise waits to become a fully fledged female, Nikki has also been placed on a waiting list to begin her transition from female to male, and expects to go under the knife in just over a year. 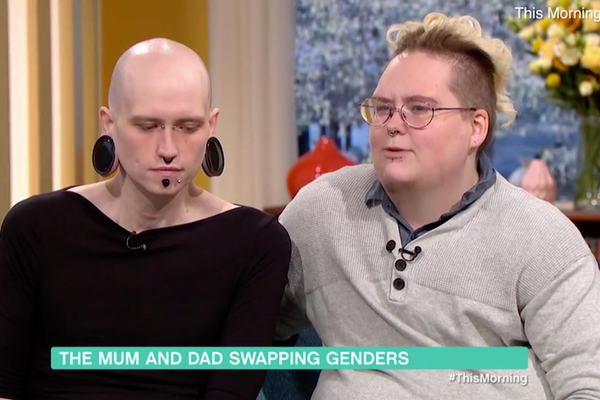 The controversial couple are regulars on the TV circuit

Many were outraged at the couple's desire to push forward with their respective operations, claiming it would confuse their child.

One user, rachelragen, tweeted: "How is this allowed? I can’t see this in any way shape or form being a healthy environment for a child to grow up in. You have to question the parents own mental stability to be making decisions such as these but to be responsible for a child...well it beggars belief."

Kirstie172 wrote: "I’ve not read this story but I’m all for equality and as long as they’re happy and the child is looked after and so on but this gender neutral stuff with kids grinds my gears. Raise him as what he was born but make it clear as he grows you will accept him in all his choices."

And Kevjcampbell said: "I’m all up for what ever paths people choose in life, but when theirs kids involved it’s just a different story. Why make the child a potential target for bullies."

432 people commented, with the vast majority echoing the opinions of the users quoted above.

Throughout the interview Phillip and Holly remained in good spirits, which also led to some criticism from viewers who were shocked at what they perceived to be 'attention seeking' from Louise and Nikki who make regular appearances on television thanks to their rather eccentric outlook.

The Dravens married in a pagan ceremony in 2012 and they are thought to be Britain's first entirely gender fluid family.