A fierce debate has erupted online since a segment on Loose Women titled 'is it a mum's job to look after sick kids?'

Guest panelist Kelly Brook, 38, stated that she thinks a lot of women use their kids as an excuse not to do their jobs properly, or to get special treatment - and they did not go down well with people at home.

The model slammed mums who use their kids as an excuse to get out of things they don't want to do, or demand different working hours to their childless colleagues.

She said: “I have a pet hate, and I don’t have children so I don’t always understand, but I do work with some women that if they can’t make an appointment or can’t do something, or there is a deadline and some people will always say ‘oh it’s because I have to wash the baby’ or ‘feed the kids’ or ‘I’ve got to do the school run’. 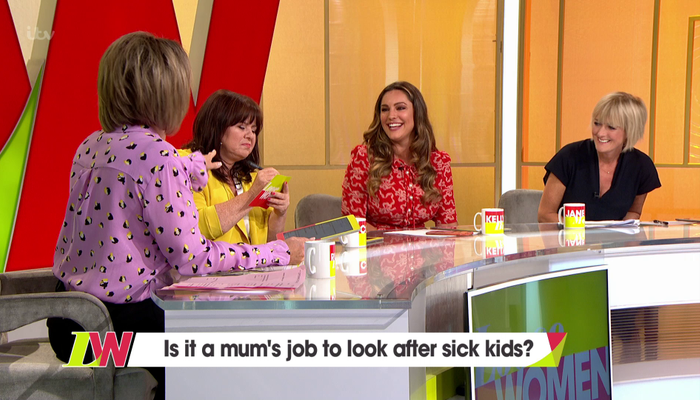 Kelly was a guest on Monday's show, but her comments enraged viewers (Image: ITV)

“Others have kids and you never even hear about the kids. They are very professional and I love that.

“I just think women shouldn’t use kids as an excuse not to do their job properly.

“I think it's nobody's business. If you can’t meet the demands of your job, don’t blame your kids.”

Kelly did concede that if a child is genuinely sick then it's a different situation, but she added that it's when women make their parental duties a reason for not doing their job properly that she gets angry.

She explained: “I have just been in situations with parents, where they have got to the school run or something.

Some people agreed with Kelly, but many Loose Women viewers were furious, and took to Twitter to slam Kelly for her views, claiming that she had no right to comment as she didn't have a family of her own.

One furious viewer posted: "If you ever have kids, you'll know not to make sure moronic comments about childcare. You have NO clue how unbelievably hard it is. NONE AT ALL !!"

Later Kelly took to Twitter to clarify her comments, writing: “It’s a debate show so I don’t expect everyone to agree with my options and that’s OK @loosewomen. However, my intention is never to upset anyone.

"I work with a lot of working mamas and they are all professional amazing women and never moan. They get on with it. I applaud them.