Would you let a stranger hold your baby? Mum sparks debate after denying cuddles

It's a touchy subject - but was this mum right to tell a misty-eyed waitress she couldn't hold her 8-month-old son?

A mother has sparked debate after she asked if she was wrong to refuse to allow a stranger to hold her baby.

The anonymous woman took to Mumsnet to express her outrage after a waitress asked to pick up her child after serving them in a cafe.

Writing under the handle Katarina12, she explained: "Met a friend for coffee and cake this afternoon with my 8 month old... DS is very friendly and sociable and the lady serving our table took quite a shine to him.

"She kept 'popping back' to check we were ok and to smile and wave at DS. 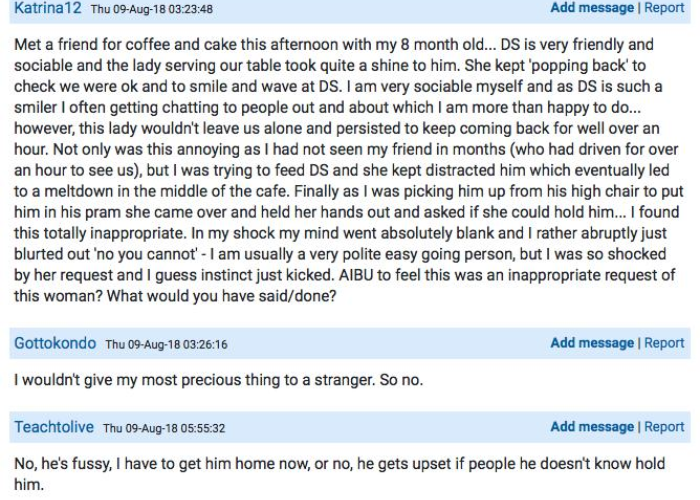 "I am very sociable myself and as DS is such a smiler I often getting chatting to people out and about which I am more than happy to do... however, this lady wouldn't leave us alone and persisted to keep coming back for well over an hour.

"Finally as I was picking him up from his high chair to put him in his pram she came over and held her hands out and asked if she could hold him... I found this totally inappropriate.

"In my shock my mind went absolutely blank and I rather abruptly just blurted out 'no you cannot' - I am usually a very polite easy going person, but I was so shocked by her request and I guess instinct just kicked.

"AIBU (Am I being unreasonable) to feel this was an inappropriate request of this woman? What would you have said/done?"

The post sparked a slew of responses, some agreeing with her stance while others thought she was being unreasonable.

A user called NeverUseThisName said: "You may have felt completely differently if she hadn't pestered you so much.

"I've offered to hold stranger's baby or toddler when I've seen someone struggling. I generally get either a grateful 'Thanks!' and the infant handed over, or a grateful 'I'm fine, but thanks for offering'.

"Occasionally there's a hostile response. But I would never pester someone about their baby. That's horrible behaviour." 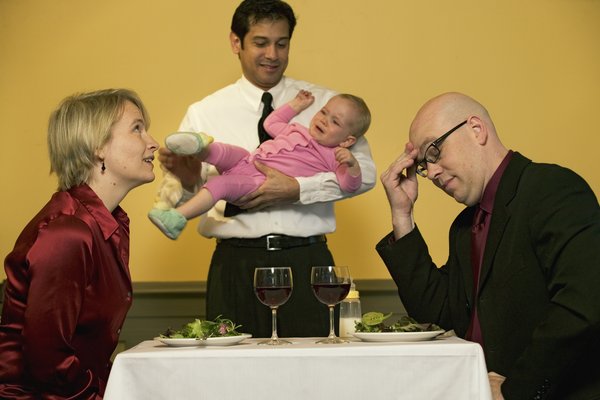 Would you let a stranger hold your baby?

While another user named ToeToeToe described the time she allowed a man to hold their child due to 'new mum fog'.

She said: "I was once queuing in the petrol station, with DS a few weeks old in my arms, and this massive bloke in workman's overalls just went "ah cute, can I hold him?" and I LET HIM.

"He cooed over him for 30secs and then handed him back. Still can't believe I allowed it. He could have been a psycho. New mum fog."

Another poster called HereAgain91 said: "If someone grabbed your phone off the table, or your watch from your wrist you’d jump up and shout either to stop or for help.

"Neither of those things are a tenth as precious as my children so yes, if someone picked them up without my express permission I would absolutely go ballistic. The world is a nasty place and a stranger’s feelings are nowhere near as important as my child’s wellbeing or safety."

A user called SpectacularAardvark praised the mother for having the confidence to say no.

She said: "Well done for having the balls to say no, OP. I used to hate this and felt thoroughly uncomfortable with it, I wish I'd stuck up for myself more when my DC was little."

However you look at it, such a situation can be challenging for a mother. The persistence of the person in question made the situation all the more difficult in this case.