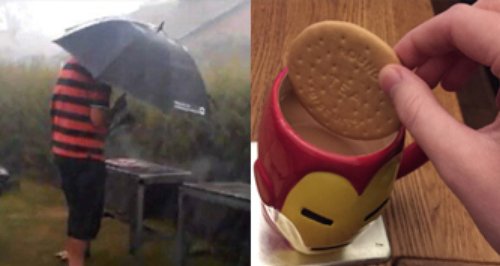 Let's face it, there are certain quirks that only come from growing up in the UK. Whether it's trying to get a BBQ going in a thunderstorm or our unbreakable connection to Harry Potter… we couldn't help nodding along when we saw these.

1) No but we actually can't believe it. This year is definitely darker than any year that's gone before. Ever.

3) Whether it's your parents, your mother-in-law or just your mates… we can help suffering from that rising panic every single time we hear the gravel being moved on the driveway:

4) How does this happen… and more to the point, why does it ONLY every seem to happen in OUR language?!

5) This is a real issue every lunch time:

"Just popping out for lunch, does anyone want anything?" - Translation: I'm getting my own lunch now, please remain silent

6) Harry Potter is life and there's frankly no point in denying fact:

7) Would it be too much to ask for Word just to create a British version already?

8) Absolutely ideal weather for a get together. Just perfect. Couldn't be better.

9) Planning all the great things you're going to do in the summer ahead… and then this happens… again:

Thanks, August. Thanks a bunch. pic.twitter.com/bdA1fBwhuw

10) ...and of course, if all else fails, just whack the kettle on for another cuppa: