What colour circles do you see? Try the optical illusion that is fooling everyone

Believe it or not, all the circles in this picture are the SAME colour.

A new optical illusion that's bound to send your eyes potty has got everyone questioning their eyesight.

Classed as a 'Munker Illusion' the image features round circles with a variety of coloured lines going through them - but what colour circles do you see? 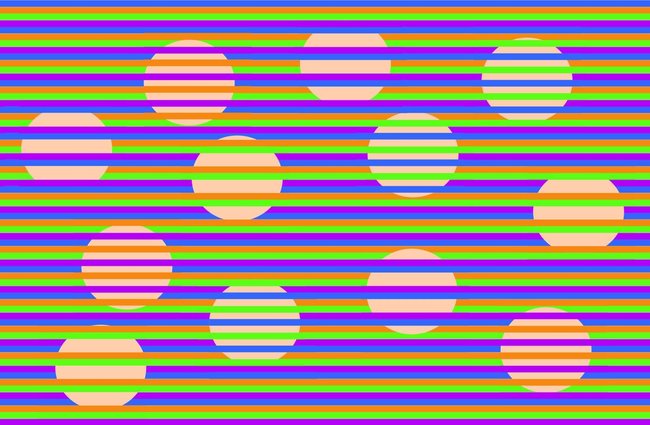 If you answer that the circles vary in colour, sadly, you're wrong.

The circles are in fact all the same shade - RGB 250, 219, 172 to be precise - but our eyes are tricked into seeing three or four different hues.

David Novick, Professor of Engineering Education and Leadership at the University of Texas, designed the illusion and named it 'confetti'.

He reveals that it's the lines penetrating the circles that cause our eyes to go into overdrive and believe there's a variety of colours.

A new Munker illusion, which I call confetti. All the dots in the background are the same color (RGB 250, 219, 172) but are perceived as four different colors. The differences are subtle, though, and depend on the size of the image when it's viewed. cc @AkiyoshiKitaoka pic.twitter.com/vT6x64LLTy

Posting to his Twitter, the professor explained that, if you zoom in, you will be able to identify that the circles are the same colour.

Many people who discovered the 'confetti' illusion on Twitter were quick to applaud the professor for his work:

Bloody hell, if I make it bigger I se them all in the same colour! WHAT KIND OF SOURCERY IS THIS?

I didn't want to believe it till I zoomed in! Crazy

Huh???? I need to learn about how this works. That’s fascinating

Did the optical illusion fool you?

When is Amazon Prime Day 2021? Key dates and the best deals and offers to look out for