Horror as family discover 20,000 WASPS living in their loft

Pest controller emerges with huge 'beast' of a wasp nest

A family were horrified after discovering they were sharing their home with 20,000 WASPS.

Pest controller Shane Jones got a call out after a mum was stung several times by 30 wasps in her bathroom - but couldn't work out where the stingers were coming from.

Finding no signs of the wasps outside her house in Newbury, Berkshire, there was only one answer... they must be INSIDE.

Read more: This is the scientific reason people prefer bees to wasps 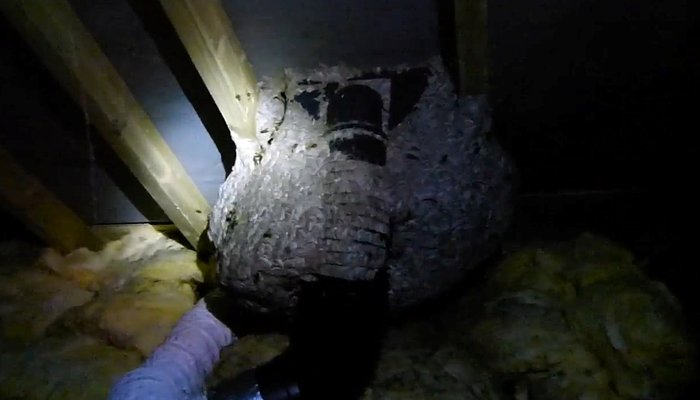 The huge nest was wrapped around a pipe in the loft (Image: SWNS)

Shane's eagle-eye spotted wasps buzzing around the bathroom extractor fan, so he went up to the loft to investigate discovering a gigantic nest which had been constructed around one of the pipes.

The Australian pest controller recorded his time in the loft for the woman's children who wanted to see him get to work but had to go to school.

He had to switch off his head torch as it was antagonising the wasps who stung him a few times before he had to retreat.

Read more: Giant hornets 'as big as a £2' set up home in Britain 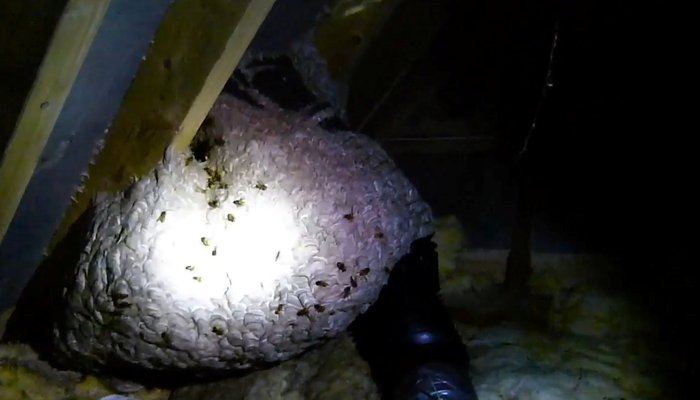 Shane said: "It was a ripper of a wasps' nest - it was a beast. It had to be two or three feet wide and was wrapped around the pipe where the steam comes out from the bathroom - but the wasps were coming down it.

"It was a busy spot and a hairy spot up there. What makes it worse is the bathroom was connected to a bedroom. That's your worst nightmare, having wasps in your bedroom."

He said he thought the frightening nest had been constructed over the past three months, it took 45 minutes for Shane to eradicate the Queen wasp and her massive colony using insecticide.

Shane, who has been operating as a pest controller in the UK for five years, added: "With the hot weather, we have been seeing a lot of bigger nests like that.

"You can't always get to it and see just how big it is but with this one, I was able to make a video to show the children who were at school."